New South Wales Golf Club have taken out their first Metropolitan Division One Major Pennant in 35 years with an impressive 5½ to 1½ win over Bonnie Doon on Sunday at Terry Hills Country Club in Sydney.

Spearheaded by Captain Zac Mullins at number 2, NSW was simply too strong with Mullins giving his opponent a lesson in match play with a 7&6 win to set the stage for the team’s victory. The lower order of Harry Doig, Shaun Cameron and Justin Kim for NSW collected the five, six and seven spots to seal the victory. 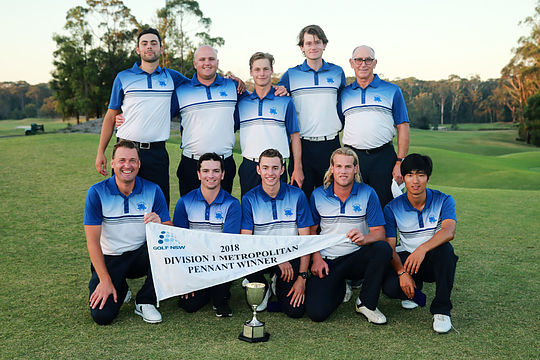 Kim accounted for Kurt Burns 1-up, Cameron was too strong for Ethan Kean winning 4&3 and Doig nailed a 3&2 victory over Andrew Cnelli. The matches of Zinio Garcia and Josh Bell, Jake Baker and Jack McLeod and the top order encounter between Michael Lambert and James Grierson were declared halved by officials once the contest had been determined.

NSW accounted for last year’s finalists, St Michael’s in the semi-final, with Bonnie Doon defeating the 2017 Flag winners, The Australian.

In other divisions Castle Hill collected their first flag in 14 years with a tight win in Division 2 over a Cronulla Golf Club 4 matches to 3. Division 3 saw Massey Park make club history winning their maiden Men’s Metropolitan Major Pennant with a 5&2 win over Glenmore Heritage Valley.

Division 4 had Campbelltown Golf Club back in the winner’s circle with a 4&3 win over Brighton Lakes. This victory has been a long time coming and sees both clubs advancing to Division 3 for 2019.

Division 5 had Kareela Golf Club pipping Springwood in a thriller with a 4&3 win in another closely fought final.

This was another stellar pennant series that had been contested over the last two months at various locations throughout Sydney where club pride is on display, as well as a combination of seasoned and emerging golfers on stage doing battle.