As far as finals go it could not have been any closer when New South Wales pipped Queensland, 4½-3½ to, win the Australian Men’s Interstate Team series at Brisbane Golf Club last Friday.

It capped off a sensational week for the New South Wales team who ended the series undefeated. 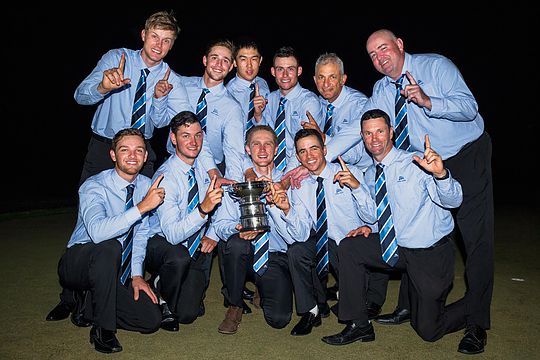 “The boys bonded real well and obviously played well and as a team we elevated well as the week went on,” said John Serhan the NSW coach.

“As I called them our ‘Cardiac Kids’, they kept coming up with the goods in those last five or six holes every match, every day and somehow managed to get those wins in by remaining patient and focused.”

Kevin Yuan playing in the number 8 position was the first to secure a win for NSW with a 3&2 victory over Steven Cox.

Dylan Perry at number 7 had earlier found himself behind Queensland’s Douglas Klein but fought back gallantly to secure a vital half for NSW.

When Blake Windred nailed a solid 5&4 win over Charlie Dann in the sixth match, NSW set to look in command.

Yet it was Queensland’s middle order which made the charge and when Shae Wools-Cobb in the fourth match won against Austin Bautista, followed by Mitchell Smith accounting for Daniel Gale, 2&1, the momentum had swung in Queensland’s favour and the final was heading for a cliffhanger.

Charles Pilon gave the Queenslanders a much needed win accounting for Harrison Endycott, 2&1, seeing three consecutive wins for Queensland to pull clear, which effectively left the balance of the final down to the top two matches.

As darkness fell quickly over the Brisbane layout so to did Queensland’s hopes of winning the title.

Travis Smyth played outstanding golf and all but secured the title for NSW winning what will be his last interstate series match on the 17th with a 2&1 victory over Blake Proverbs.

It was not that Proverbs had played badly. To the contrary the Smyth/Proverbs match had been the standout match of the final as the pair traded birdies and fought tooth and nail all afternoon.

But the result proved to be the pressure release for NSW and after Smyth secured the win, Cameron Davis, who was 1-up with two to play, needed only to square the top-order match against the talented Anthony Quayle.

Davis, however, responded with a sensational victory in his own right as the 2015 Australian Amateur champion rolled in a 7 metre putt on the 17th to shut the door on Queensland with an impressive 2&1 victory over Quayle to give NSW its first Interstate Series championship since 2012.

“We did believe that we had the team to dominate the series,” said Serhan.

“We did so much hard work and preparation. The boys in the HP program with Dean Kinney have been killing it all year winning events all over the place and they all did an extremely good job this week.”

It was not all ‘near misses’ for Queensland as their Women’s team claimed the Interstate title the day earlier at Royal Queensland.