New South Wales women’s team has won the Australian Interstate series for the second successive year after a superb performance by all six team members in the final with a 5½-½ win over Queensland.

Both teams had ended the round robin series even in games and in matches meaning the championship was there for the taking. Despite earlier hiccups with a 3&2 loss in their opening match of the series against Victoria, NSW delivered the goods to cap off the series with an impressive team effort in the final. 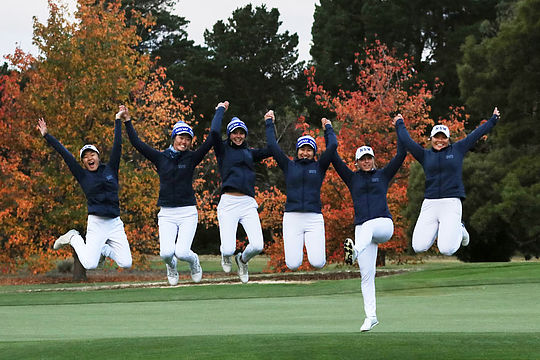 From the first match out, won by Sophie Yip with five consecutive halved holes to finish 1-up, to Doey Choi in the No.1 slot, New South Wales were simply too strong for Queensland in the final in what was a dominate display of individual golf within the team environment.

Co-skipper Grace Kim was 5-under when she accounted for Issy Taylor 3&2. Steph Kyriacou made six birdies in beating Queensland skipper Dee Dee Russell, 4&2, and Kelsey Bennett made five of her own in accounting for Lisa Edgar 5&3.

Choi had been 3-down through 12 in her match at No.1 against Cassie Porter, yet mounted a spirited fightback to halve the match after making four birdies in her final six holes.

“I was not letting the team down and not going to finish without a fight. So I just gave it all I had…and here we are.”

“Having most of the girls from last year makes it feel a lot better that we can do it again.”