“We have invested heavily in a rebuilding program with the help of Golf Australia and the results have reflected in this,” said Les Browne, team manager for New South Wales.

“The team as a whole played well all week and it is great to see their commitment and hard work yielding results, particularly Jake Higginbottom who just returned from Europe this week to play in the team.”

Higginbottom secured a 2-up victory in the top-order match over Ryan McCarthy, Drewitt playing number two squared his match with Cory Crawford, Bringolf displayed brilliant golf for a 4&2 victory at the number three position over Andrew Phillips and Jordan Zunic at number four was too strong for Nathan Gatehouse, winning 3&2.

Tasmania were seeking to create their own history having last collected the Interstate honours in 1977.

Mark Schulze, playing number five for Tasmania secured his match over Dimi Papadatos, 5&4, and John Cassidy at number six for Tasmania was too strong for Ricky Kato, winning 3&2.

The lower order for New South Wales proved too strong for the Tasmanians with Ben Clementson securing a vital 4&3 win at number seven over Samuel Rawlings and Callan O’Reilly winning the eighth order match with a 1-up victory over Matt Rose.

The second consolation final with Victoria against South Australia had Victoria securing a 6&2 win over the host state. 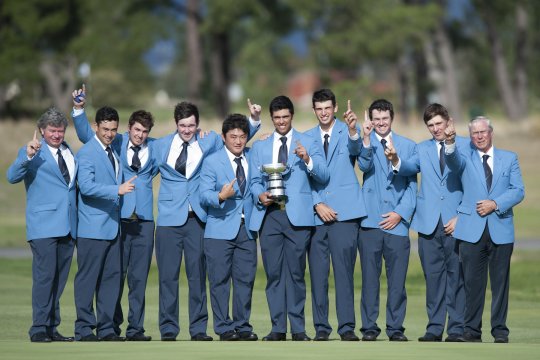 The NSW team is all smiles after winning the 2012 Australian Men's Interstate Teams series at Royal Adelaide (Photo: Anthony Powter)

No player in these series remained undefeated.

Other interesting results for the final day included Brady Watt’s 6&5 win over Cameron Smith and talented young gun Oliver Goss securing a half against Daniel Nisbet.