Stephanie Kyriacou has qualified for the 2017 US Girls’ Junior Championship after finishing runner-up at the sectional qualifying at the Mauna Lani Bay Resort Course in Hawaii.

Kyriacou fired a round of 71 to finish one stroke behind local Allysha Mae Mateo to give the 16-year-old her ticket to her first ‘major’ junior championship. 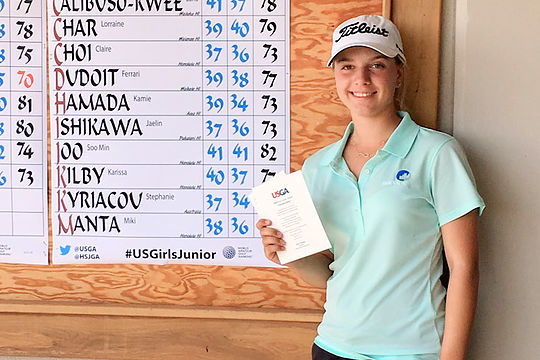 “I hit the ball solid the whole day…would have been good if a few more putts dropped in.”

“It’s exciting knowing that I’ll be playing against some of the best girls in the world,” said Kyriacou.

The US Girls’ Junior will held July 24-29 at Boone Valley golf Club in Augusta at a P.B. Dye design that opened in 1992. The layout will be hosting its first US Girls’ Junior and second USGA championship. The US Junior Amateur was contested there in 2007.

A field of 156 players will contest for one of the most sought after junior titles with players playing two qualification stroke rounds with the top-64 scores advancing to match play.

If it’s any indication as to the strength of the US Junior Girls’ championship the champion’s honour board includes five US Open winners, twenty-seven LPGA Tour winners, with seven having gone onto win the US Women’s Amateur

Kyriacou has been in stellar form this year and has made her international mark.

As a member of the Australian team that finished third in the Toyota World Junior in Osaka Japan last month, Kyriacou’s game has gone from strength to strength.

Coached under the watchful eye of John Serhan at St Michael’s Golf Club in Sydney, Kyriacou came through the Club’s development ranks as a sub-junior, having won the Junior Club championship there as well as being part of Serhan’s ‘Elite Squad’ of hand picked junior talents.

Kyriacou’s recent results include a runner-up finish at the JNJG Illawarra Junior Masters, a top-10 at the recent Australian Girls’ Amateur, with her best international finish winning the 2016 Maple Leaf Junior in Canada.

Kyriacou was part of the NSW women’s team that was narrowly defeated in the Australian Interstate Teams series at Royal Fremantle Golf Club in May, and in April, she was undefeated as NSW retained the Girl’s Interstate teams title.