After trailing for a majority of the 36-hole championship match, which had Ogletree at one stage 4 down through five holes, the 21 year old solidified his game to record one of the largest comebacks in a US Amateur final. 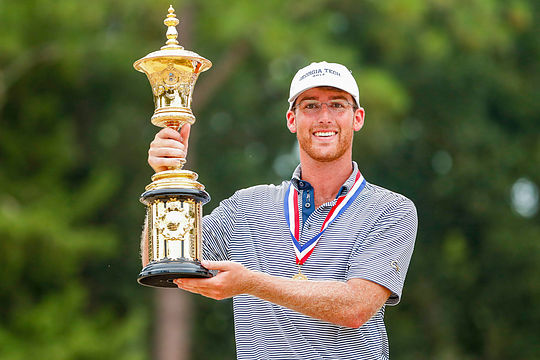 The Georgia Tech senior made just two bogeys over 35 holes in the final, equalling the mark set by 2008 champion Danny Lee and 2017 runner-up Doug Ghim to snatch the victory.

“I showed a lot of resilience out there and never gave up,” said Ogletree, who was playing in his fifth USGA championship. “I kept telling myself I’m going to win this championship, and just always believed that.”

Ogletree led for just four holes, compared to 29 for Augenstein, but his ability to stay close in the morning round when Augenstein threatened to build an insurmountable lead, set up his comeback on Pinehurst No. 2’s inward nine.

The turning point in the match came on the 287 metre par-4 31st. Ogletree played conservatively on the drivable par-4, laying back with an iron, while Augenstein hit driver into the left greenside bunker.

Playing first, Ogletree spun a sand wedge back to within a metre. Augenstein blasted his bunker shot to two metres, but his putt lipped out. When Ogletree converted his birdie effort, the match was square for the first time since the opening hole of the match.

The victory gives Ogletree a number of entries into major events, not the least of which is a spot on the United States team for the 2019 Walker Cup, which begins 7th September at Royal Liverpool in England.

Karl Vilips finished the best of the Australian contingent bowing out 4&3 in his quarterfinal match against William Holcomb V.

Playing in his fifth USGA championship and third US Amateur, the 18-year-old Vilips had earlier fired an impressive second round 65 to enter the match play segment as the 22nd seed after opening with a 77, which had him at 8-over par through 10 holes in stroke play, yet Vilips played his last 26 holes in 6-under par.

This season has been an impressive year for Vilips who tied for sixth in the Northeast Amateur, matching the Wannamoisett course record of 61 in the third round.