Teenagers Su Oh and Eun Woo (Annie) Choi share the lead after the opening round of the RACV Ladies Masters on the Gold Coast.

The duo carded four-under-par rounds of 69 to hold a slender one shot lead over a quartet of players, England’s duo of Holly Clyburn and Charley Hull, Norway’s Caroline Martens and 2009 Champion Katherine Kirk. 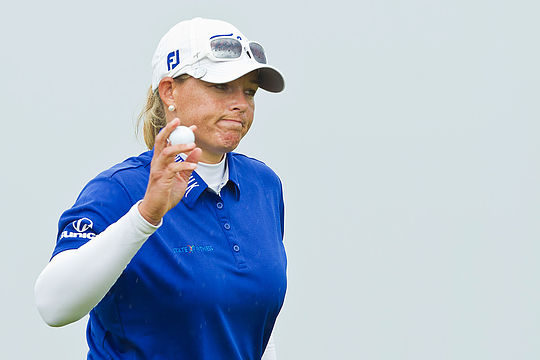 2009 champion Katherine Kirk-Hull sits one stroke of the pace at the RACV Ladies Masters (Credit: LET)

Oh, who was out in the morning wave got off to a sluggish start from the 10th tee and went out in one-over-par, however went on a birdie blitz on her back nine, with four birdies in five holes. She then finished off her round in style with an eagle on the par 5 9th when she holed her 10 metre eagle putt.

For Choi, the 19-year-old got it to six-under-par with two to play, however she unfortunately finished bogey, bogey to drop back into a share of the lead with Oh.

Right behind Oh is fellow compatriot Kirk, who played her first round with borrowed clubs and clothes was asked with that kind of score, “you can play with any equipment you’re that good, and wear anything.”

The Queenslander laughed and responded, “I don’t know about that, I think I just had a good day and got lucky I guess. I guessed a few clubs right and very unexpected but I’ll take it.”

Good news is that Kirk’s clubs have arrived and she was pleased when she was advised after her round,

“I have been told they’re here. So I’ll be getting the clubs out this afternoon and probably trying to hit a few with those, trying to get reacquainted with them and the feel.”

But I was fortunate, I went over to the Palm Meadows yesterday and Leigh and Peter Harrington have a fitting facility and Matt over there helped me out.”

South African Lee-Anne Pace, the highest ranked player this week at No. 29 on the Rolex World Golf Rankings, is at even par and tied for 22nd. Also at even par is last week’s winner Marianne Skarpnord.

Dame Laura Davies is a further shot back and tied for 34th position, while Rachel Hetherington didn’t get off to the best start and back in 76th place at four-over.