18 year-old Victorian Su Oh has become just the fourth Australian to win the RACV Ladies Masters with a blistering streak of birdies over her closing holes on Sunday.

In just her second full event as a professional, Oh emerged from a tightly bunched leaderboard which included 2009 champion Katherine Kirk to birdie the final four holes for a three-stroke victory. 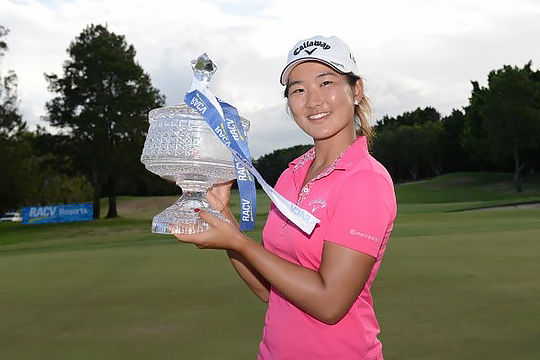 Oh finished at seven-under par with Kirk and the English pair of Florentyna Parker and Charley Hull tied for second at four-under.

Oh now joins Kirk, Karrie Webb and Jane Crafter as the latest Australian to win the title and have her image etched on the Walk of Champions at RACV Royal Pines. In the process, she also demonstrated that she’s a quick learner following her runner-up finish in the previous week’s Victorian Open.

“I was just really happy that I was in contention in my first week,” Oh said, after shedding tears as she left the final green.

“This week I just wanted to do that same, stay in contention and just you, know, get sort of used to it and know how it feels to be in contention. But to win it, is just amazing.”

The former No.1 ranked amateur in the world also sought out the advice of eight-time champion Karrie Webb and two-time winner Jane Crafter, who was in commentary at Royal Pines.

“I also spoke to Jane Crafter this morning. She won it the year I was born. What she said really helped me,” Oh said. “Jane just said take one shot at a time.”

Kirk’s bizarre start to the week almost resulted in victory, after playing the first round with borrowed clubs and clothes when her own had gone astray on her long flight from the Bahamas.

Hull eagled the final hole to share second place but will rue the triple bogey seven she ran up on the sixth hole while in the lead, which included an air swing from up against a tree.

Fifth place went to Annie Choi at three-under while six players finished at two-under-par including leading amateur Rebecca Kay, who had to win a qualifying event on Monday just to earn a spot in the field.

With her proud father on the bag, the slight 16-year old from Coolangatta wowed the galleries with her smile and skills and capped it off brilliantly with a tap-in birdie on the 18th to secure low amateur honours.

Scoring conditions at the Masters were decidedly more difficult than in past years, in part due to the blustery conditions and rain squalls that fortunately cleared on Sunday.

The layout’s redesigned nine holes drew praise from all the players and provided a much tougher test. The revamp of the remaining nine holes by Graham Marsh and his team started almost immediately after the tournament concluded.

The ISPS Handa Women’s Australian Open takes place at Royal Melbourne this week, where Oh will get to thank Webb in person for the advice that helped her secure what many expect will be the first of many wins in her career.