It hasn’t taken long for the Women’s NSW Open to settle into a permanent spot on the calendar of women’s professional sport in this country.

Indeed, since hitting off in 2006, the event now holds pride of place as one of the coveted events to contest when some of the best players in the world – as well as a host of “homesick” locals return to our shores. 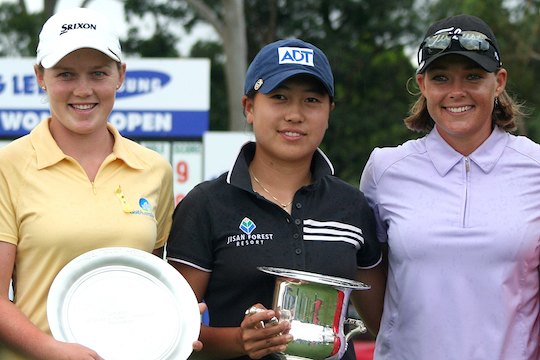 It is now also a qualifying event for elite amateurs in the Karrie Webb Series.

As the only international women’s golf tournament in NSW, the tournament was fortunate to attract support from its current major sponsor, Bing Lee as well as the NSW Government in its efforts to gain a place on the golfing calendar.

The prize pool in its first year lured an international line-up of 60 professionals and 40 top Australian amateurs with a field that included the now familiar names of Sarah Kemp and Nikki Garrett and numerous other winners from the Ladies European, ALPG and LPGA Tours, to establish that truly international flavour.

The key to the next NSW Women’s Open was to reschedule the tournament to align with the two flagship events on the women’s golfing calendar in Australia – the Women’s Australian Open and the Ladies Masters.

That launched the official “Summer Down Under”.

The re-scheduling proved to be a winner by being able to draw some of the biggest names in women’s professional golf such as the then World No.1 and women’s golf ‘Hall of Famer’, England’s Laura Davies, who was followed by a contingent of 35 members from the Ladies European Tour (LET), which included other leading players such as France’s Gwladys Nocera and Germany’s Bettina Hauert.

It was in 2009 we saw the emergence of Sydney’s Sarah Oh, who won the tournament by three shots from an internationally-successful Katherine Hull as well as a highly-credentialed field boasting plenty of international success.

It almost seemed like deja-vu in 2010 when both Oh and Hull again battled it out for the title before Oh again prevailed, sealing her win with four consecutive birdies from the sixth to ninth holes.

From there she held on until dropping that final putt, while a disappointed Hull dropped to her knees after narrowly missing her putt on the final hole to force a play-off.

Golf NSW is proud to lay claim as the only state to host a women’s Open.

As its history recounts, the Bing Lee NSW Women’s Opens has now cemented its permanent place on the Australian Women’s golfing schedule, attracting the cream of the best players from Europe and Australia.

In the past few years the tournament has attracted players from all corners of the globe.

And 2011 will continue that theme with a host of international players set to descend on Oatlands Golf Club.

And all of them keen to raise the NSW Open trophy in victory.

For more information on the 2011 Women’s NSW Open visit: www.golfnsw.org

The ALPG “Summer Down Under” series has grown to include five major events: