Teeing off in the morning field, Web.com Tour player Aron Price, 17-year-old Amateur Jack Sullivan and Victorian Michael Choi took advantage of the conditions to fire opening rounds of 6-under 66. 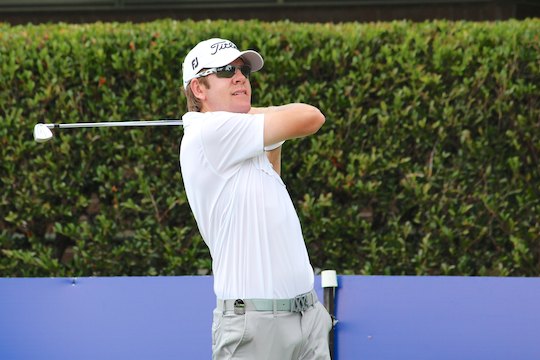 “We were lucky, we had great conditions and the greens were really good this morning,” said Price.

“Only on my last two or three holes did the wind get up above five or 10 kilometres, we had it pretty good.”

Returning to Australia as an experienced player Price is impressed with the quality of young talent coming through the ranks.

“I’m 31 so I’m definitely no young gun anymore. It’s good to see the young guys, like my playing partner Jack Wilson and five or six others with so much talent,’ added Price.

“For five or six years, besides Jason Day, the amateurs haven’t transitioned as well so it’s really good that the young guys at the moment are transitioning perfectly.”

One of those talents is his co-leader Jack Sullivan who, as an amateur, is playing his first PGA Tour of Australasia tournament.

“I was very nervous on the first tee, but I had a good group, they were very talkative and calmed me down. I had a really good day,” said Sullivan, who enters the field courtesy of winning the NSW Junior Boys Championship.

Aiming to make the cut and hoping to be leading amateur, Sullivan was surprised with his first round performance.

“I’m very surprised, I was hoping to shoot around square but no bogeys helped today,” added Sullivan.

“It’s very exciting to see my name at the top of the leaderboard. It just goes to show that I can do it.”

Also co-leading is Michael Choi, who led the 2011 NSW Open after the first round.

“The last time I played the NSW Open, when it was played in Newcastle, I led but I faded away. I just want to put in a solid round tomorrow to have a chance on the weekend,” said Choi, who recently started working with a new coach.

“I have just started seeing Dale Lynch and the swing changes are starting to kick in, it’s feeling a lot more comfortable now than about a month ago.”

Finishing a shot off the pace at 5-under the card are Victorians Glenn Joyner and Ashley Hall, New South Welshman James Nitties, New Zealander Ryan Fox and Korean Jun-Seok Lee.

The second round of the Gloria Jean’s Coffees NSW Open Championship tees off at 6.30am with the leaders out in the afternoon field.