Olesen, 26 eventually won by three strokes with a round of 69 for a 20-under par tally on the Regnun Carya course. 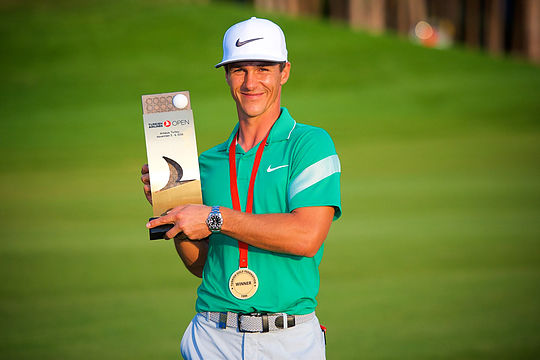 It is Olesen’s fourth European Tour success and has taken his career earnings through the €7m barrier in his seventh season on the tour while the London-based player has moved from 32nd to ninth on the Race to Dubai.

“It was a weird feeling coming out today knowing I was leading by seven as I knew the guys would shoot a low number today, so I had to go out and see if I could make a few birdies,” he said.

“After nine holes there were a few guys shooting low numbers so all of a sudden there was a lot of pressure on me.”

“But I tried to play steady and clearly the last four holes were tough mentally and it was really difficult.”

Olesen’s biggest challenge came from England’s David Horsey who had managed to cut the Dane’s lead to just one shot in racing to six under par for his round through 12 holes.

Horsey went into the last day sharing second place at 11-under par and while he birdied the 15th to go to 18-under the Englishman dropped a shot at the next to eventually shoot a round of 65 and share second place on 17-under par.

Joining Horsey in second spot was China’s Haotong Li who capped a similar last round 65 with four birdies in succession from his 14th hole.

Olesen had been level par over his outward nine with one birdie and a bogey before finally answering Horsey’s charge with birdies at the 12th, 14th and 15th and while he bogeyed the 16th it was still good enough to secure the biggest purse of his eight-year pro career.

“I was watching the leader boards around the course and I knew what I had to do, and even though my lead was down from seven shots to one, it does put pressure on you,” he said.

“But to win this event means a lot to me as the last three to four months my game has been pretty poor, and I haven’t played well.

Masters Champion Danny Willett failed poorly to regain his Race to Dubai lead in posting closing round 75 for a disappointing two over par tally.

Willett needed to finish fifth or higher to go past the absent Henrik Stenson but ended the Turkey event sharing 68th place.

The Englishman could manage just two birdies in a last day effort that also included four bogeys and a fifth hole double bogey.

Both Stenson and Willett will be contesting Thursday’s starting Nedbank Challenge at Sun City in South Africa and the second of the Tour’s Final Series.

The ever-consistent Scott Hend lead the way for the Aussies finishing in equal 25th place at 6-under with Nathan Holman tidying up a messy start to the tournament with back-to-back rounds of 69 over the weekend to finish in 62nd place.