Dane Thorbjorn Olesen sensationally ended a four-year victory drought, claiming a sixth Tour win, holing a curling, downhill monster 35-foot birdie putt at the last to win by a shot at 10-under.

Olesen, 32, went into the last day leading by three. But with three to play he was two off the lead after a round of five bogeys and just one birdie before proceeding to eagle the 17th for a second day running and then birdie the last as he had also done a day earlier. 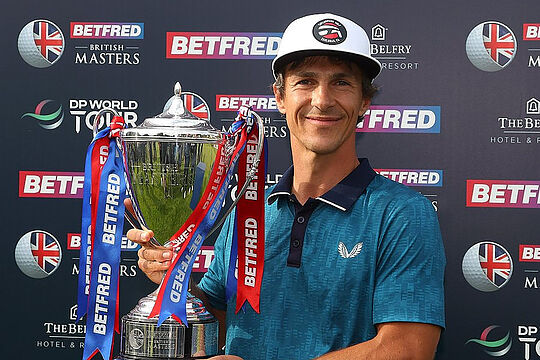 Three years ago, Olesen’s golf career looked to be over after being alleged to have been involved in sexual assault, and also urinating in an aisle while travelling first class on a British Airways flight.

Olesen was suspended by the Tour but then in December, 2021 he was cleared of all charges, and also allowed back on Tour.

He said: “This is a massive tournament, with so many great former champions, and to win here is a great achievement. The crowds this week have been amazing, and you always get great support in Britain, and I just got so much support all week.”

“It was obviously a pretty tough day and hit a lot of shots to the left. I was really struggling. I somehow just kept going, and yeah, what a finish. Incredible.”

“Standing on 17, I’m thinking I can make birdie, birdie and maybe get into a play-off. But obviously when I got the chance on 17, I prefer to take that. 18 is a tough hole, so par is a good score obviously. I just gave it everything.”

As for a first victory celebration?

“It’s going to be a quiet celebration with my partner, and my little son”, he said.

Olesen said on Saturday evening he expected to feel the nerves as he sought to win for the first time since victory at the 2018 Italian Open and so it proved, but his experience helped him to remain in contention before his stirring finish saw him take the acclaim of the 15,000 strong crowd.

Victory sees him move up to tenth on the DP World Tour Rankings, up from 78th, and become the second Dane after Thomas Bjørn in 2015 to win the event, which boasts an illustrious honour roll.

Sweden’s Sebastain Sodeberg, 31, came from five shots back in posting a 68, and was on the practice range expecting a play-off before officially being second at nine-under.

Jason Scrivener was the sole Australian to make it through to the weekend. The Western Australian finished in a share of 45th place on even par.