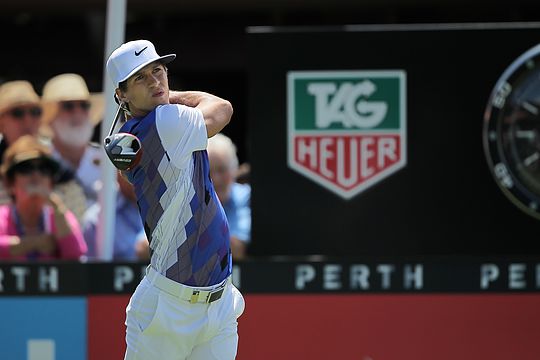 Wade, who is 46-years-old and the Assistant PGA Professional at Commonwealth Golf Club, was surprised at his low round but pleased with the composure he showed on course.

“It feels a bit weird actually. I certainly haven’t been top of the leaderboard for a hell of a long time,” said Wade, who made the turn at 6-under the card.

“I was just proud that I didn’t let it go after I was 6‑under, which is really annoying for most guys.”

“And someone in my situation, you’re probably half expecting that to happen.”

Wade may not be a famous name but he has had his share of highlights including a win on the European Challenge Tour in 2006 and most recently competing at The Open Championship in 2013.

“I played a British Open at Muirfield with no golf, and that’s pretty scary. I got through qualifying and had to really man up in front of a pretty intense environment,” said Wade who also Monday qualified for the Perth International.

“So I felt today at least, even though it was a long time ago, it was over 12 months ago, I can draw on some of that stuff.”

Matching Wade’s course record round was Thorbjorn Olesen from Denmark who teed off in the afternoon field.

“I played really, really well the front nine. I gave myself a lot of chances there,” said Olesen.

“Especially my short game was amazing out there. My chipping and bunker shots were really, really good. So I’m very pleased.”

“I haven’t played as well as I wanted to this year, so it was nice to get in one of the good groups,” added Olesen who splits his time between the European Tour and PGA TOUR.

“I think it just gave me a little boost in confidence before I went out there.”

Enjoying Lake Karrinyup, Olesen was proud to hold a share of the record on the challenging layout.

“I think it’s a great golf course. The greens are perfect. Layout is great. So I was really happy to play well,” added Olesen.