The return of the Isuzu Queensland Open to the PGA Tour of Australasia schedule is gaining huge support amongst the players but in particular a number of Australia’s former international champions. 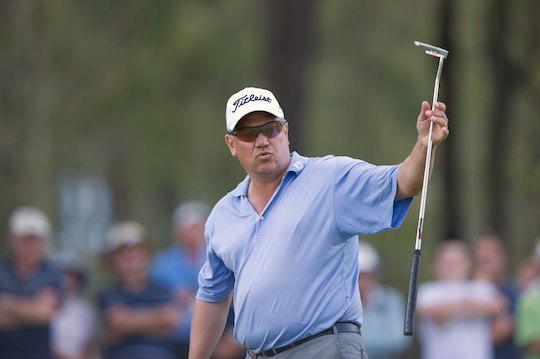 “I have heard such great reviews of the golf course, which is probably my main reason for playing. I heard that Brookwater is consistently rated the best course in Queensland,” said Leaney, while for O’Malley it is a matter of getting the competitive juices flowing once more.

“I have had some time off, I was moving house and I had a knee operation so I just wanted to get back to golf,” said O’Malley who has fully recovered from a tear in his meniscus.

Between them, the pair has 21 international victories but the Queensland Open title has eluded them.

As two of the most experienced competitors in the field they plan to draw on their knowledge to give them a competitive edge.

“From what I have read and seen Brookwater is a very tight tree lined golf course and big greens with tough levels which suits my game,” said Leaney.

“It’s not all about power; you have to be very precise with your tee shots and iron shots and have a lot of patience. I guess being around as long as I have I tend to have all those qualities, so hopefully I can bring those to the week of the Open,” he added.

“Every golf course we play these days is getting longer and longer which doesn’t help me but I know how far I hit the ball and I can control it,” said O’Malley.

“So a golf course where there is a strategy and a lot of thinking about where the right spots are to hit the ball then my experience will help.”

Aside from the competitive element tournaments such as the Izusu Queensland Open also present an opportunity to help develop young players.

“I try to play with a few guys either in practice rounds or in the lead up and a lot of them are asking questions about how to do things which is great because that is exactly what I did when I turned Pro,” said O’Malley.

“You have to try and learn from people who have been there and done that so I am quite happy to give some advice.”

The younger generations have left their own mark on Leaney who is impressed by the quality of player coming through the amateur ranks.

“They are on the verge of turning Professional and they are only 17 or 18 years old, there is certainly a trend and these guys have more of a chance to win these tournaments than what they used to,” said Leaney referring to Jake Higginbottom and Oliver Goss winning as amateurs on the PGA Tour of Australasia last year.

Leaney himself won the West Australian Open as an amateur and knows the opportunities that a tournament like the Isuzu Queensland Open can present to those just starting their career.

“I pretty much got my start when I won my first West Australian Open as an amateur back in 1991 and I know how important these tournaments are to the development of young guys,” said Leaney.

“It will be god to get drawn with a couple of guys who haven’t been around before and hopefully they can learn and kick start their career.”

The Queensland Open has traditionally been an important development event for some of Australia’s best international golfers including Greg Norman, Peter Senior, Ian Baker-Finch, Stuart Appleby and Brett Ogle.

The Isuzu Queensland Open will be held 22-25 August 2013 at Brookwater Golf and Country Club.

Player pre-qualifying will be held on 19 August 2013 at Virginia and Keperra Golf Clubs.