Ona beats the pros at their own game

If star Queensland amateur Ashley Ona had long-term goals of turning pro, they are now ‘short-term’ following her remarkable victory against a star-studded professional field in the 2011 ActewAGL Royal Canberra Ladies Classic.

The 19-year-old prodigy held her nerve on the last hole to produce a great up-and-down from the back of the 18th green to secure the title against a line-up that included Aussie LPGA star Katherine Hull and English great Laura Davies. 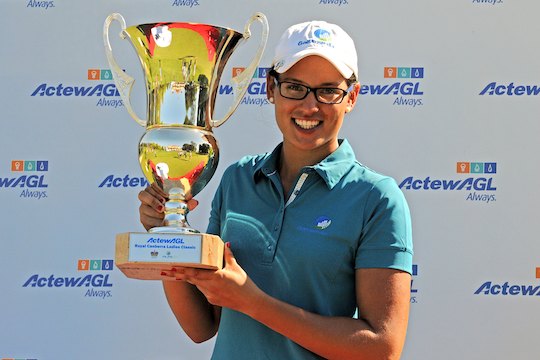 It was a phenomenal performance from the humble Gailes Golf Club member, who simply outplayed her esteemed rivals after being the equal leader heading into the final round with Sydney’s Frances Bondad.

Ona got off to a flying start with birdies on the first two holes. She quickly built up a three-shot lead with four holes remaining before American Alison Walshe, who was playing in the group in front of her, flew home with birdies on the final three holes and just missed an eagle putt on the 18th to finish at 11-under par.

Ona had to par the last to secure victory and after spraying her second shot in the trees on the right, her punched third shot into the green flew over the back. She was left with a tricky up-and-down, but thankfully for her she loves her pitching wedge and played a fantastic pitch under enormous pressure to one foot and calmly tapped it in for the win.

After her final round of three-under par 70, the 2009 Australian Girls Amateur Champion’s emotions were out there for the large gallery to witness.

Tears were flowing and she was swamped by two of her aunties that had followed her for the entire 54 holes.

“It was definitely my biggest win and I think it is a great stepping stone. I now have the confidence to match it with these girls.”

Asked whether she would have liked to have received the winner’s cheque she forfeited as an amateur, Ona said: “I’d probably be lying if I said ‘no’ but I just wanted to win it, to have that title and trophy is enough.”

Runner-up Walshe was very philosophical with her efforts.

“Ashley played great, I played well and kept it strong but she just played better. I am totally happy with the way I played today,” she said.

Local star Nikki Campbell had her best round of the week, a four-under par 69 to finish tied for 10th at five-under par while crowd favourite Davies couldn’t get anything going and finished tied for 16th after 76 in the final round.