Not many competitions in any sporting sphere can boast one million competitors. Neither can they skite that a sponsor has supported the event for 25 successive years – and is showing no signs of “flagging”.

Yet that’s the remarkable history of the Holden Scramble, one of the world’s most successful golf tournaments which this month crowned their one millionth Holden Scramble participant when Robert Osborne from Ashmore in Queensland signed on at Mt Warren Golf Club for their Scramble. 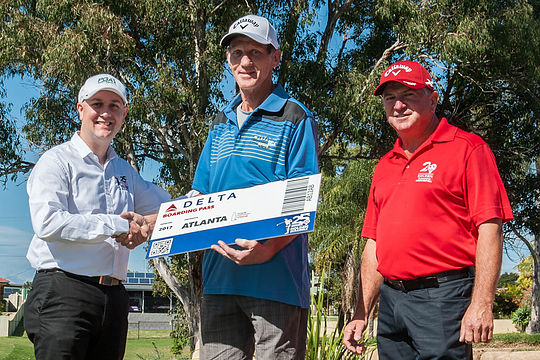 An unexpected reward for Osborne and his team of Daniel Osborne (son), Greg McGibbon and Dereck Odgaard is the trip of a lifetime to Atlanta for the 2017 PGA Tour Championship although Osborne admitted he thought he was the victim of a joke by his mates.

“This is terrific. I really don’t know what to say; it’s amazing,” said Osborne.

“I really don’t quite believe this is happening; this is one of the biggest things I’ve ever won by far.”

Certainly Osborne beat the odds to win that honour as Holden Scramble events are these days played right around Australia including regional events at places like Broome, Kalgoorlie, Alice Springs, Cairns and even off-shore on Norfolk Island.

According to CEO of the PGA of Australia Brian Thorburn their successful relationship with Holden has assisted the PGA to grow the game of golf at grassroots level in all corners of Australia.

“We greatly appreciate the support they have given us over the past 25 years,” he said.

Osborne and his team receive return airfares to the US with Delta Airlines where they will be treated with transfers, four nights’ accommodation and tickets to the 2017 PGA Tour Championship.