The 44th staging of the Thailand Open will be the launching pad this week for the fast-growing OneAsia tour’s 5th season, with the season-opener attracting the cream of Asia-Pacific talent thanks to the groundbreaking partnership with the Japan Golf Tour Organisation (JGTO).

A host of past and present No. 1s, including Japanese icon Shingo Katayama, Thailand’s Thaworn Wiratchant and tournament winners of more than 200 titles between them, will feature in the U.S. $1 million tournament at the Greg Norman-designed Thana City Golf & Sports Club from Thursday. 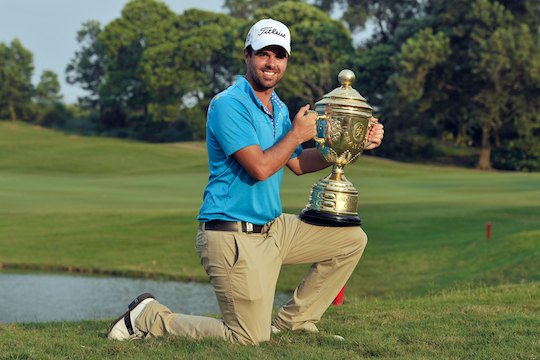 The Thailand Open and the Enjoy Jakarta Indonesia PGA Championship in two weeks are both jointly sanctioned by the JGTO for the first time, sparking unprecedented interest amongst players and setting the tone for what promises to be another blockbuster season for OneAsia.

European Tour co-sanctioned Volvo China Open and two of Korea’s most prestigious events — the GS Caltex Maekyung Open Championship and the SK Telecom Open — have already been confirmed while the high-profile Emirates Australian Open and Australian PGA Championship presented by Coca-Cola bring down the curtain in December.

The Korean Open, Charity High1 Resort Open and Nanshan China Masters will be played in the middle of the year but the full schedule of events — all with a minimum purse of around U.S. $1 million — will not be confirmed for several weeks.

Australian Nick Cullen won the Indonesian Open last year on the course the Indonesia PGA is to be played this year and is excited by the prospect of playing more co-sanctioned events with the JGTO.

“It’s really exciting to have the opportunity to gain status on a tour as big as the JGTO,” said Cullen. “I played three events there last year and loved every minute of it. I would be ecstatic if I could play there full-time.”

Three-time Major champion Padraig Harrington added his personal approval for the partnership ahead of his appearance in the Thailand Open.

“I think this is the way forward in golf outside of the (U.S.) PGA Tour. I think where possible, other tours around the world should merge so that the field is as good as possible every week.”