It appears ‘R&R’ and the Durban Country Club are the perfect mix for Louis Oosthuizen as the South African came from behind to birdie the final two holes to successfully defend his Volvo Golf Champions on Sunday.

The former Open champion, who always looked throughout the week to be just slightly off his absolute best, trailed compatriot Branden Grace by one shot going into the final two holes but birdied both from close range to once again open his year with a win on home soil, the fourth time he has achieved the feat. 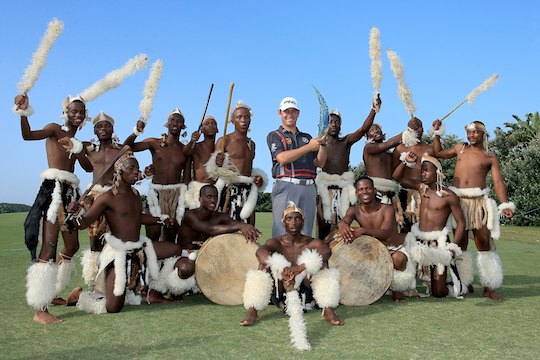 “It looks like proper rest, with no golf, is the key for me. It doesn’t work all of the time, but it has for the last few years.” he said.

“It’s great to start the year with a win again, it feels really good and hopefully I can defend next year.”

“Volvo is an unbelievable company, with what they do for golf on The European Tour and worldwide, so to defend the Volvo Golf Champions tournament is special, and hopefully I can go three in a row.”

Grace had carded a closing 68 in the group ahead set the clubhouse target of 11-under par and then watched as Oosthuizen holed from two feet on the 17th and then chipped to the same distance for another birdie on the short par-four 18th.

Oosthuizen also signed for a round of 68, a 12-under par total of 276 and his seventh European Tour title, pocketing € 507,655. The win was especially sweet for Oosthuizen after his struggles with injuries that saw him miss many months of action in 2013.

Grace came home strongly after an opening round 74 and some missed chances during his final round as he fell just short in his bid for a fifth European Tour win, having also won this title two years ago when he defeated fellow countrymen Ernie Els and Retief Goosen in a playoff.

“I let a couple slip out there which was unfortunate, but it was a good start to the year,” he said. “If you told me my first event, I’d start off with a second place and coming this close, I would have taken it. So I’m very pleased. The winner at the end of this week is going to be the true champion, and Louis played well, so he deserves it.”