Collin Morikawa set the early clubhouse lead at 9-under but overnight leader Louis Oosthuizen was able to claw his way back to the top of the leaderboard with a sensational 65 to take a two-shot lead into the weekend.

Oosthuizen was slow out of the gate again with consecutive pars before a birdie at the 7th and a birdie-birdie-eagle run from the 12th saw him finish at 11-under to set a new record 36-hole low of 129 besting the 130 mark set by Brandt Snedeker and Nick Faldo.

“Today we got really — I would say lucky sort of the last nine holes. It was as good a weather as you can get playing this golf course. All of us took advantage of that. I think in our three-ball we had a 64 and two 65s, which you don’t really see around a links golf course.” 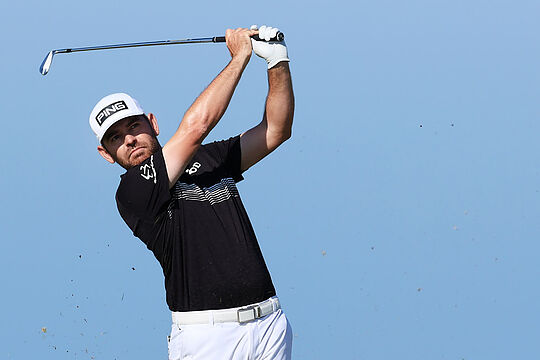 2017 Open champion Jordan Spieth also kept his hopes alive with 3-under 67 leaving him at 8-under and outright third place.

World No.1 Dustin Johnson moved up 15 places with a superb 5-under 65, which included two bogeys, which sees him in a three-way tie for 4th place and four shots off the pace.

Four-time major champion, Brooks Koepka and Jon Rahm both salvaged some pride returning rounds of 66 and 64 respectively to sit on 5-under and will need something special on Saturday.

“There is always a chance. Tomorrow is the most important day obviously right now. If I can put another solid round like I did today, post a good number, and hope that the leaders don’t go too low, I think that’s the job,” said Rahm of his chances of back-to-back majors.

Out of 11 Australians in the field only two players made the cut with Cameron Smith cementing his place with a gutsy 67 to share 17th place on 4-under.

Adam Scott played himself back into the tournament with a 4-under 66 to close out Friday in equal 40th at 1-under.