Louis Oosthuizen has wasted no time in making up for his near miss at the US Open last month.

The South African, who was paired with Jon Rahm and reigning Open champion Shane Lowry, has shot to the outright lead on day one of the 149th Open Championship with a superb bogey-free 6-under 64.

Oosthuizen leads by a stroke over Brian Harman and Jordan Spieth. The 27-year-old is still searching for his first major win since taking home the Claret Jug at the 2017 Open Championship.

Oosthuizen, who won his only major title at the 2010 Open and has finished runner-up six times since then including twice this year, got off to a slow start with pars coming at his opening seven holes before reeling off three in a row from the 8th hole to get himself into the mix.

Another three birdies from the 13th hole earnt him the clubhouse lead, which he was able to maintain for the rest of the day. 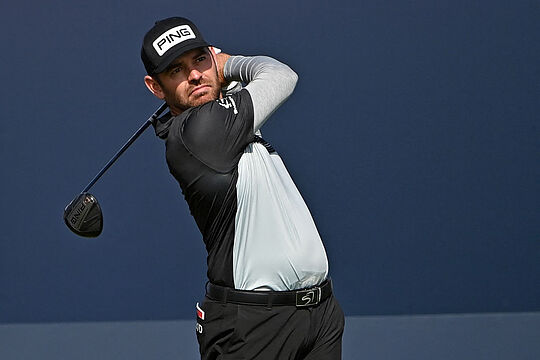 “I’ve learnt over the years playing major championships that patience is the key thing,” said Oosthuizen about his slow start.

“I was just very patient. I was trying to just hit my shots and didn’t really hit anything close enough to make birdies those first few holes, and then all of a sudden just made two good putts on 8 and 9 and got the ball rolling. It happened quickly, but you still need to put yourself in those positions, and I felt definitely the last 10, 11 holes I gave myself a lot of opportunities.”

Cameron Smith was the best of the Aussies in a 16-way share of 32nd place at 1-under alongside Rickie Fowler, Xander Schauffele and Brooks Koepka.

“It was quite brutal out there this afternoon, to be honest. Windy, gusty. I don’t think the morning boys quite had the gust. When the wind goes up and down like that it’s just tough to read…hopefully we get a morning like that tomorrow,” said Smith.

Another shot back at even par is the in-form Lucas Herbert, who is coming off the back of a win at the Irish Open last fortnight. Herbert joins twenty-five other players including Rory McIlroy, Tony Finau and Johannes Veerman, who finished third behind Herbert at Mount Juliet.

“I felt like I’ve not really had a great day, and all of a sudden I was under par and not far off the leaderboard. That was quite pleasing,” said Herbert, who had to get a police escort to get him to the course on time due to heavy traffic in the area.