Shane Lowry was over the moon after finally winning at Wentworth, going to the top of the 2023 Ryder Cup qualifying process and claiming victory for his DP World Tour colleagues with an emphatic BMW PGA Championship success in England.

Lowry came from two shots back at the start of the third and final round, birdieing the closing hole in a 65 for a 17-under par tally around the famed Burma Road course, following the flagship events reduction to 54-holes following the passing of Queen Elizabeth II.

In ending a long overdue three-year victory drought since his 2019 Open Championship, Lowry also erased Wentworth memories of eight years ago when he was denied victory by Rory McIlroy.

This time the BMW PGA victory shoe was on Lowry’s foot with McIlroy leaving his eagle putt right on the edge at the last hole that would have sent the event into a play-off.

Though McIlroy could look back to the 71st hole where tree-trouble for a second day running spoiled his chance for birdie and eventually signing for a 67 and grabbing a share of second with Jon Rahm, who shot a ‘preferred lie’ 62, and each ended at 16-under. 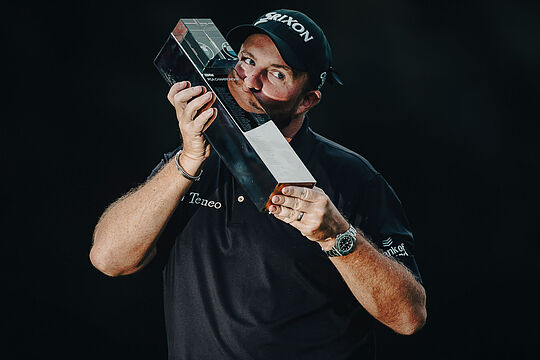 Fair credit to McIlroy as no sooner had he ended his round he was seen wrapping his arms around fellow Irishman Lowry.

“I’m over the moon as It means a lot, it means a lot to win as it’s been a good year but then I have been close a few times, and I felt I only have a few events left this year and I really wanted to try and win one,” said Lowry.

Victory earns Lowry a long overdue sixth pro career win since his 2019 Open Championship success, lifts him to 5th on the Race to Dubai and should also see him move to No. 19 in the world.

There was close to a 90-min delay early in the final round due to fog but when play resumed it was the Burma Road big guns making their presence felt, including Jon Rahm, out 15 groups ahead of Lowry and posting 62 to be well in the clubhouse on 16-under.

Lowry tied the lead with Rahm at 16-under with a greenside bunker shot to just eight inches at the par-5 12th hole. He parred the 14th to 16th holes and there was a very audible cry of ‘s#%t’ from Lowry when his tee-shot at the daunting par-5 17th headed right into trees but fortunately leaving him a shot to the green. He parred 17 ahead of the birdie he needed to finally win at Wentworth.

The triple FedEx Cup winning McIlroy ignited his goal of winning back-to-back title on either side of ‘The Pond’ when he eagled the par-5 fifth hole for a second of three rounds but then like day one, he bogeyed the par-4 eighth hole.

McIlroy birdied the 10th and then for three rounds in succession, he birdied the par-5 12th before that very trademark McIlroy roar of approval in grabbing a birdie at 15 to now be just one off the lead.

However McIlroy, playing in the group behind Lowry, followed his fellow Irishman into the trees right at 17 and just a day after sending his drive into the left side treeline and eventually shaving the hole in walking off with a par.

Then there was McIlroy, along with the spectators surrounding the final green, looking on in total disbelief that his eagle putt did not drop at the final hole. But despite the heartache, McIlroy was full of praise for his good friend and fellow Bears Club estate neighbour.

“I didn’t have my best stuff and it was sort of a struggle all the way around. But I’m incredibly happy for Shane. He’s been knocking on the door a lot this year. The two that spring to mind are The Honda Classic and RBC Heritage Hilton Head. He had two great chances there and wasn’t able to get over the line. I know he’s always played well here and this is a tournament he would love to win and obviously he did today.”

American Talor Gooch, contesting the event for a first time, became the highest placed LIV Golf star, eagling the last in a score of 65 and finishing fourth at 15-under.

Scott Hend led the field for the Aussies in equal 32nd place on 9-under while a 4-man group including Maverick Antcliff, Min Woo Lee, Adam Scott and Jason Scrivener shared 42nd place on 8-under.