Is it the Tiger Woods factor – or is it just the fact the Northern Irish are so delighted to have The Open Championship back on their shores?

Either way tickets for the 2019 Open Championship at Royal Portrush have already sold-out. 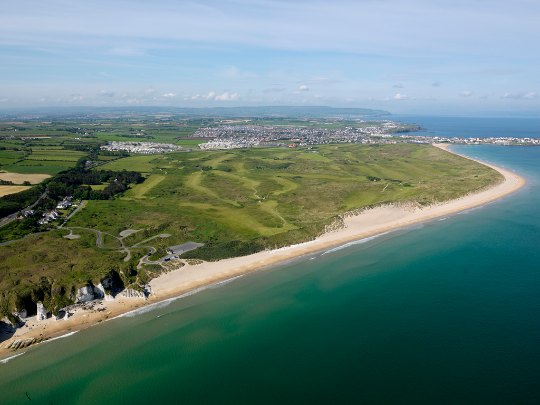 The Open was last played there in 1951, and was won by the late Max Faulkner.

And there probably aren’t many golf fans who can remember that.

But the Old Claret Jug’s long-awaited return has certainly stirred plenty of interest in the home of former Open champions Rory McIlroy and Darren Clarke.

It will be the same venue, Royal Portrush, a popular and revered layout regarded as a convergence of land and sea and boasting some of the best putting surfaces in the world…and ranked seventh best course in the world by leading US magazine Golf Digest.

Situated on the North Antrim Causeway Coast, Royal Portrush occupies a triangle of giant sand hills with views of the hills of Inishowen in County Donegal in the west, the Isle of Islay and Southern Hebrides in the north, with the Giant’s Causeway and the Skerries in the east.

The course is overlooked by the ruins of the 13th century Dunluce Castle, which gives its name to the Dunluce course on this 36-hole layout.

Amazingly, this is the first time in 148 years that the Open Championship has been sold out.

More than 190,000 tickets were made public, a fifth of which were gone within 48 hours of posting.

It smashes this year’s record at Carnoustie, which set the mark at 172,000.

The 2019 Open Championship is due to begin there on July 18.

And just for the record, Rory McIlroy holds the course record of 61 on a layout he probably regards as his ‘home track’.