It won’t earn him a last minute invitation to The Masters but for 33-year old South Australian Wade Ormsby, victory in the Asian Tour’s Panasonic Open India will taste just as sweet after breaking through for his first win as a professional on Sunday.

Ormsby held the overnight lead in difficult conditions at the tight Delhi Golf Club and clung on for a final round 71 for a 9-under par total and a one shot win over Thai veteran Boonchu Ruangkit. 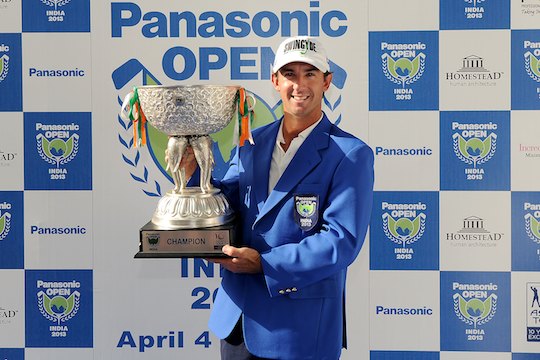 Singapore’s Lam Chih Bing, who led briefly during the final round, settled for third place after carding a level par 72.

Ormsby earned US$54,000 for the win and is the second Australian winner on the Asian Tour in as many events, following Scott Hend’s victory in the Chiangmai Golf Classic last week.

“It means so much. I’ve played tournaments worldwide but to finally get a win in Asia is fantastic,” Ormsby said, clutching the trophy.

“I was so disappointed in Malaysia and Chiangmai as I played well on both weeks but didn’t finish them off. I knew there was a win in there for me and I am glad I came here.”

Ormsby rode an emotional rollercoaster early in the round after a settling birdie at the 2nd was followed by a disastrous triple bogey seven on the 3rd hole.

56-year old Ruangkit, seeking to become the oldest winner on the Asian Tour, birdied the same hole for a four-stroke swing.

However, Ormsby showed fighting qualities honed by numerous trips to Qualifying Schools over the years to regain the lead with three more birdies before the turn.

“I felt pretty good on the fourth tee but I just put my head down and tried to get down into it and birdied the fifth,” said Ormsby.

He all but sealed victory with a birdie on the par- three 17th hole before a par at the last clinched the win and the highlight of an up and down 12 year career in the professional ranks.

Sydney’s Adam Groom was the next best Australian in a tie for 15th place at 1-under with Matthew Stieger, Kieran Pratt, Sam Brazel, David Lutterus and Anthony Choat filling minor places further back in the field.