Australia’s Wade Ormsby has won the Hong Kong Open for the second time in just two years after cruising to a four-shot victory at the Hong Kong Golf Club on Sunday.

Ormsby, who joins Peter Thomson and Greg Norman as multiple winners of the event, fired rounds of 65, 66, 66 and 66 to hold off a late charge from Open Champion, Shane Lowry, who came home in second place at 13-under with a final round 64.

The close friend to fellow Adelaide-born Adam Scott earned a first prize cheque of US$180,000 that has seen the 39-year-old go to the top of the Asian Tour money list.

And while Ormsby is celebrating he could also have been sitting back comfortable in knowing he had also earned a two-year exemption on the European Tour.

The 2019 event, which was set down for early December, was postponed over fears for player safety resulting from the on-going demonstrations in Hong Kong. However the European Tour elected not to go ahead with joining the Asian Tour in sanctioning the rescheduled event as it clashed with the South African Open. 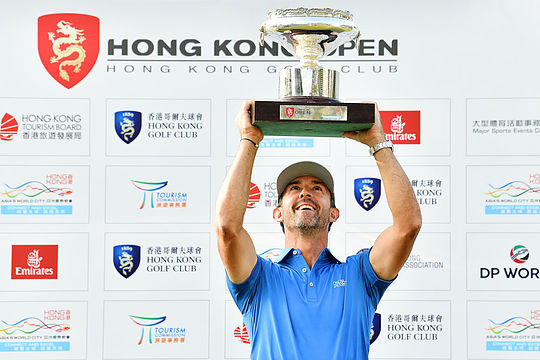 “I’ve been working my guts out the last 14 to 15 months trying to take my game to the next level,” he said.

What’s In The Bag – Wade Ormsby

“Losing the Australian PGA three weeks ago was one that one really hurt me so I’ll put a few changes in place. I worked out over the break and to come back here and get the win so soon, I can’t put it into words really.”

“It’s still nerve-racking coming down the stretch you know. Obviously I didn’t get off to a great start (but) I felt good out there I just had to keep doing my thing because I knew I was playing really good.”

“I was hoping to win this season but to do it in week two of the year in my first event is special and it will be one I’ll remember forever.”

Ormsby broke through for a maiden pro career victory at the 2013 India Open and four years later he won the UBS Hong Kong Open by a stroke from four players.

“I have three wins on the main tours in my career and this is my first wire-to-wire,” said Ormsby.

“I’m very proud of my play this week. Going through what I went through three weeks ago, that kind of hit me pretty hard. I didn’t even want to know the game for three or four days, but to come back and do what I’ve done this week, like I said, proud of myself and proud of my team.”

Dave Gleeson and Terry Pilkadaris were the next best of the Australians in a share of 7th place on 8-under followed by Travis Smyth at 7-under.