Ormsby not getting carried away by 16-year Major wait

(Erin Hills, Wisconsin:) Wade Ormsby is clearly not letting himself getting carried away by ending a 16-year wait to tee it up in his maiden Major at this week’s US Open at Erin Hills.

Ormsby got his first look at the Wisconsin course last weekend tackling the huge rural golfing estate boasting just five threes and laid out on the site of an ancient glacier. 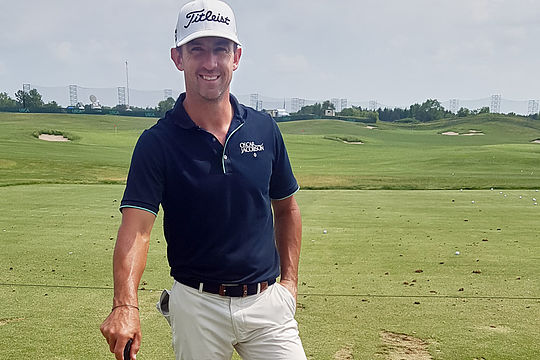 Wade Ormsby warming up on the range ahead of this week’s US Open (Credit: Bernie McGuire)

Ormsby and Scott go back a very long way. Their fathers competed alongside each other in the 1960′s and when Ormsby first went to Europe in 2004 he rented Scott’s former London residence.

There was also the scenario of Ormsby, who was leading at the time, being grouped with Scott for the final round of the 2014 Australian PGA Championship.

So, their friendship has endured for a very long time despite Scott climbing to the very summit of the game and Ormsby struggling at times to find his footing.

Ormsby and Scott shook hands on the 18th at Erin Hills wishing each other well this week and then after some lunch, Ormsby and Coles spent a considerable amount of time on the range that is also so expansive you could easily squeeze in four or five extra holes.

Of course, Ormsby is no stranger to competing in the States having played here in 2008 on the PGA Tour’s secondary Nationwide Tour.

On his recent trip to Walton Head in Surrey for the 36-hole US Open qualifier, the South Australian got to admire a photo in the clubhouse of Kiwi and good friend Michael Campbell who did the same in 2005 and then went on to deny Tiger Woods at Pinehurst. It was there that Ormsby finally realised what was becoming a fainter and fainter dream.

“There was something thereabouts in the back of my mind that I would never get to contest a Major, so all you can do is keep putting yourself through the process of trying to qualify”, he said.

“I always felt I was good enough to qualify but then you still have to go out there and do it. But it is what it is, and you have to keep on taking each week whether it is a regular tournament or a US Open qualifier and try you best.”

“Also, it is always one of those things you want to do in your career and that is to compete in the Majors and the thing is there is only a four a year, so the opportunities are very limited.”

“For me, there is really only the US Open and the British Open where I have a chance to qualify so I finally have got through to one and here I am at Erin Hills competing in a US Open so it feels really nice.”

“They say the US Open is the toughest of the four Majors so all I can do is see how the week pans out and just try and plod my way around, and really just enjoy the experience and the week.”

“So, standing here now on the range at a US Open I do feel proud that I never gave up and it is testimony that if you keep trying you can reach that goal.”

“We both thought this course does have a Moonah Links feel to it set out on a similar type of landscape with big run offs around the greens”, he said.

“You just have to try and take some of those run off areas out of play, so that is going to be one of the strong keys to playing well this week.”

What has already been strange for Ormsby is that he has been bumping into other players he recalls competing alongside when contesting the Nationwide Tour that now, of course, is the Web.com Tour.

“The thing is I have been playing alongside so many of these guys here this week around the world for a good many years now like on the European Tour and back home in Australia for like the last 15 to 16 years”,  he said.

“So, it is not like I am over-awed being here this week.”

“Also, I was kind of picking Adam’s brain out there this morning as to how to go about the rest of the week and things like that.”

“There are not too many guys out here with as much or any more experience than Adam, so he has been really helpful.”

“The thing is this is a US Open and if you can put the ball in play and hole a few putts you never where that could lead to.”