Ortiz defies World No.1 Johnson to win in Texas

Carlos Ortiz has become the first Mexican player in 42 years to win on the PGA Tour when he outlasted World No.1 Dustin Johnson to win the Houston Open on Sunday.

Ortiz, a three-time winner on what was then the Web.com Tour in 2014, fired five birdies in a five-under par 67 for a two-shot victory over top-ranked Johnson and Hideki Matsuyama.

The last Mexican player to win on tour was Victor Regalado in 1978 at the Quad Cities Open.

Ortiz finished at 13-under overall with the 29-year-old securing a start at next year’s Masters and in the process received 500 FedExCup points and a US$1.26 million payout from the event’s $7 million purse

Ortiz is up to a career-high 65th in the world from 160th last week. 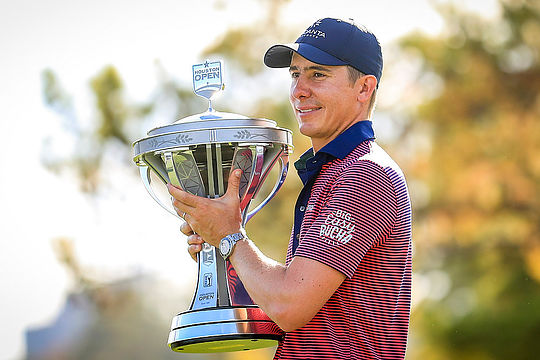 “It feels great. It’s been a while. It’s been I think almost six years since I won and I missed it,” said Ortiz.

“I’ve played great this week and it was really hard to hold the emotions all the way to the end, but I’m really happy the way it played out and the way I played, too.”

“That’s what I did and I wasn’t really worried about other guys. I know the back nine is hard, so I knew if I played good, I was going to have a really good chance.”

In his first full PGA Tour season in 2014, Ortiz finished 93rd in the FedEx Cup and had a season-best finish of T9 at the OHL Classic at Mayakoba. However he lost his tour card after a poor 2016 season.

He then played on the Web.com Tour in 2017 and 2018 and regained his place on the PGA Tour after the 2018 season and finished the 2018–19 PGA Tour season 113th in the FedEx Cup Playoffs following a third place in the Sanderson Farms Championship.

The Houston Open was Johnson’s first start since was quarantined in a hotel room after contracting coronavirus.

Most players would be rusty after returning to PGA Tour competition after a month and a half away from the sport, but not Johnson. He rattled off two straight four-under rounds of 66, and capped off the tournament with a five-under 65 to send a message to this week’s Master’s field that he’s still well in the hunt.

The Queenslander hit 4 of 13 fairways and 11 of 18 greens in regulation, in an encouraging return to form for the Masters.

The Houston Open was the first domestic PGA Tour event that allowed spectators during the COVID-19 pandemic, with 2,000 tickets sold daily.