It’s a far cry from telling superstars like Tiger Woods and Dustin Johnson where they went wrong.

And a pay cheque of €1,035 for a week’s work is probably not that much for a professional golfer to write home about. 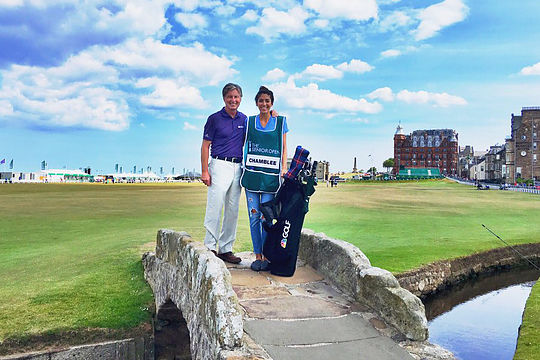 Yet American Brandel Chamblee proved that although he gave up playing serious professional golf some years ago, he still has some game.

The outspoken US Golf Channel analyst put himself back in the driver’s seat at last weekend’s British Seniors Open when he came through qualifying to get a start in the event, meaning he had to vacate his analyst’s seat, albeit temporarily, while he took to the links at St Andrews.

Chamblee fired rounds of 77-75 to finish 120th behind Miguel Angel Jiminez but the 56-year-old American showed he was quite prepared to put himself back in the ‘cauldron’.

Just a day after ‘dissecting’ the 147th Open Championship at Carnoustie, Chamblee headed to nearby Scotscraig Golf Club in an attempt to qualify for this week’s Senior Open.

Chamblee also qualified at Scotscraig to make the field for the 1995 Open at St. Andrews, and the course once again proved friendly as he shot a two-under-69 to share medallist honours, earning one of seven qualifying spots at Scotscraig and one of 27 spots available across four different qualifying sites.

While Chamblee has played little competitive in recent years, in a recent Golf Channel podcast he explained that he wanted to make a return to competition at the Old Course, where he made the second of three career Open appearances 23 years ago.

“I want to try to get back into competitive golf, and I wanted another week at St. Andrews.”

Chamblee last played a PGA Tour event in 2008 when he missed the cut at the AT&T Pebble Beach Pro-Am.

But this was his Seniors’ Tour debut…and it may not be his last.