After a memorable round of golf at Forest Resort Creswick, New Zealand’s Gareth Paddison has claimed victory at the Adroit Insurance Group Victorian PGA Championship.

Heading into the final round with a three shot lead Paddison had an eventful round which saw him shoot four birdies, four bogeys and a triple bogey to be three over par for the day posting a tournament total of seven under 277. 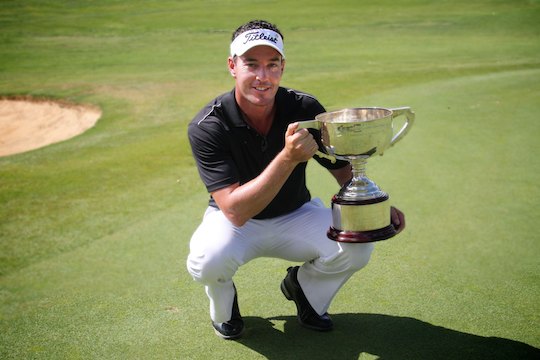 “It was a very patient round, I got a little unlucky I felt on 13,” said Paddison whose lead diminished after posting a triple bogey on the hole.

“I wasn’t really doing much wrong, I felt that after I made triple well I’m still one up but proceeded to drop a shot on 15, then made a bad swing on 16 and 18 and unfortunately dropped two shots.

“It was a real dog fight in the end to cross the finish line I am just glad that I did it and you know you can put it all down to experience I guess, it was really encouraging sign that I can still finish off a tournament.”

A relieved Paddison walked off the 18th green the victor by a stroke from Victoria’s Leighton Lyle.

“Relief would be the only word to describe how I was feeling at the last, just because of how many shots I had dropped and because it really wasn’t a true reflection on how I felt I played, so it was just nice to cross the line.”

“At the end of the day a win is a win, you only need to get there by one shot and so it was very satisfying.”

Playing in the second last group Lyle posted a six under 276 and watched from the clubhouse as the final group’s lead diminished eventually leaving him the runner up.

Second round leader James McLean was the hard luck story of the tournament, being just behind Paddison all day he went on to post a seven on the final hole to finish four under the card and tied seventh.

“I was fortunate that James dropped shots at the same time I did especially on 15 and 16 because that could have turned the game around,” added Paddison.

“It was just a shame that he finished off the way he did, obviously I feel for another golfer that’s in a good position to not even come second when he was there all day.

“Admittedly he played better than he scored but it’s only a matter of time before James wins on the Aussie tour or where ever he plays.”

Paddison now looks forward to next week where he will head to Toowoomba, defending champion, for the Coca-Cola Queensland PGA Championship.