Ryan Palmer and Jon Rahm shot a 3-under 69 in the alternate-shot final round on Sunday to win the Zurich Classic over Sergio Garcia and Tommy Fleetwood by three shots in the PGA Tour’s only team event.

It was the fourth PGA Tour title for the 42-year-old Palmer and his first since the 2010 Sony Open in Hawaii. Rahm, 24, secured his third PGA Tour title having finished in the top-10 for the seventh time this year.

The winners each earned 400 FedExCup points and took home US$1.05 million, moving Rahm up to nearly US$3.1 million this season and Palmer to roughly US$2.3 million.

The revamped format saw best-ball used in the first and third rounds, with foursomes on Sunday, much to the delight of players and fans.

Rahm and Palmer held the 54-hole co-lead with Scott Stallings and Trey Mullinax, but Rahm and Palmer birdied the 10th and then made pars on 11 and 12 as other groups recorded bogeys. Rahm and Palmer then widened the gap with birdies on 13 and 14 before making pars the rest of the way home to a three-shot victory. 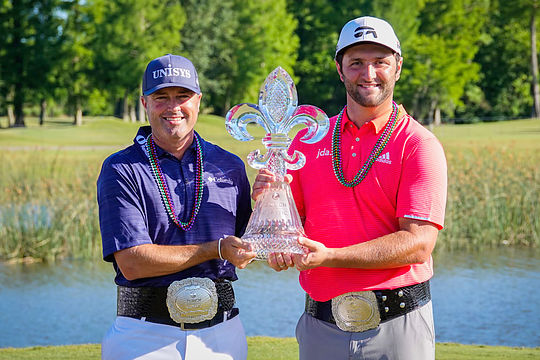 Sergio Garcia and Tommy Fleetwood birdied the final two holes including Garcia’s 13 metre birdie putt from off the green at 17 en route to shooting a 68. That was enough to have clubhouse lead, which stood until the final group of Palmer and Rahm stormed home.

The Australian pair of Jason Day and Adam Scott, pre-tournament favourites and possible Presidents Cup teammates later this year, failed to make the cut after opening with 65-72 to miss the mark at 7-under.

The teams of Kyoung-Hoon Lee-Matt Every and Brian Gay-Rory Sabbatini tied for third, five shots behind. Four teams tied for fifth at 20 under, four more tied for ninth at 19 under and defending champions Billy Horschel and Scott Piercy were among five teams tied for 13th at 18-under.

Aussie Curtis Luck and his American playing partner Hank Lebioda finished in a share of 5th position to earn US$163,000 each which for Luck was his second biggest prize amount after his US$216,000 for a 5th place at the Quicken Loans event in 2017.

Matt Jones was the only other Australian to make the cut, the former Australian Open Champion pairing with J.J. Spaun to finish in 22nd position.

Now three years into the team format, the Zurich Classic is unique on the PGA Tour schedule. It was fascinating to see the partnerships of mates, fathers and sons and having them play as a team and putting pressure on each other to help each other.

The scoring average for Four-ball over the tournament was 65.685 whereas the average for Foursomes was 71.561. The best Four-ball round was a 12-under 60 from Brian Gay and Rory Sabbatini in round one. Palmer and Rahm’s 7-under 65 in round two was the best in alternate shot format.