Queensland’s Rod Pampling posted an incredible round of golf in the final round of the Emirates Australian Open yesterday.

The 46-year old capped off a ten-under par round of 61 with a lengthy eagle putt on the 18th to set the clubhouse lead of six-under par and three shy of leader Matt Jones at the time. 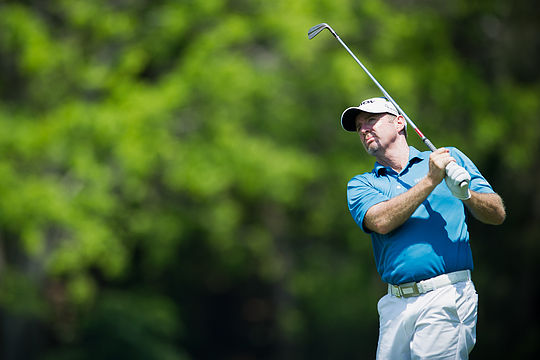 The round breaks The Australian Golf Club’s course record of 63 set by Jordan Spieth in the corresponding round last year and is the lowest in Pampling’s competitive career.

“It didn’t look good early on, it was just kind of building and then at the end there, things clicked and just started to go in.” Pampling said.

“That putt on the last was just one of those one in a million and I’m just thankful it went in.”

“I really can’t think of too many (more) shots I could have picked up. You can always find a couple but I’m more than happy with a 61.”

Pampling has shown a liking for Sundays at The Australian after coming home strongly in 2014 to wrap up second place behind Jordan Spieth’s magical 63.

Pampling earned a start in The Open Championship with his finish last year and with this round he will again be on his way to the world’s oldest championship at Royal Troon next July.