Pan outlasts Kuchar at RBC as World No.1 crumbles

Taiwan’s C.T. Pan has secured his first PGA victory at the RBC Heritage on Hilton Head Island. The 27-year-old shot 4-under-par 67 on Sunday to finish at 12-under overall to hold off former champion Matt Kuchar by a stroke.

The former University of Washington collegiate golfer nailed birdies on the 5th, 9th, 10th, 12th and 16th during his final round to pass a number of players including World No. 1, Dustin Johnson, who entered the final day with a one shot lead over the field.

This is Pan’s third year on tour with his previous best finish coming at the 2018 Wyndham Classic, where he tied for second.

“It’s really hard for me to believe,” said Pan. “I’m just processing it. My phone has been vibrating the last 10 minutes. I was just so happy I finally got it done.”

World No. 1 Johnson was seeking his third worldwide win of the year. Even after a slow start, he made the turn in even par to retain a share of the lead.

Then his game turned for the worst in a horror five-hole stretch from 11 through to 15.

A wayward drive at the 11th hole led to a bogey, and he dropped another shot on the par-4 12th. He made his third bogey in a row on the 13th, where he missed the green from 100 metres away in the fairway.

On the par-3 14th he dropped two shots after hitting his tee shot into the water, and he made another double bogey on the 15th. 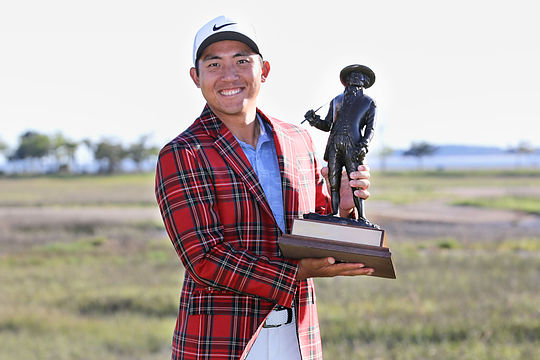 The string of dropped shots saw Johnson at 7-over for the day, and even after a birdie on the final hole he fell from the lead into a tie for 28th. His final-round 77, which included a 6-over 41 on the back nine, beat only defending champion Satoshi Kodaira (82) for the equal worst round of the day.

This is the third time that Johnson has shot 77 or higher in the final round when starting with the lead, two more than any other player in the last 15 years. The other instances came at the 2010 US Open at Pebble Beach and the 2017 WGC-HSBC Champions.

Whilst not wanting to label Johnson’s efforts as a ‘gas’, it certainly draws attention to his inability at times to close out a tournament when holding the third round lead.

Patrick Cantlay, Scott Piercy and Shane Lowry tied for third at 10-under.

Marc Leishman was the best of the Australians finishing at 3-over and in a share of 58th position to be the sole Aussie to make the weekend. Aaron Baddeley, Cameron Smith, Rod Pampling all missed the even par cut mark.