Firing 1-under 71 in the final round, Papadatos has won the title by two shots from Adam Bland and Jake McLeod. 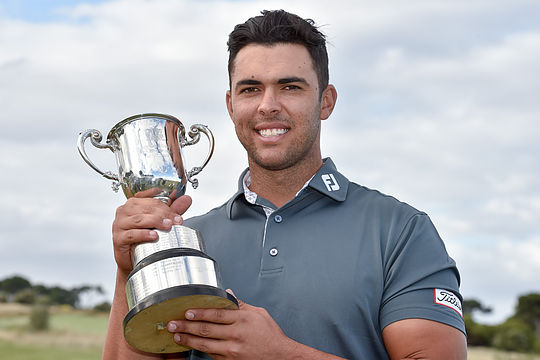 Victory didn’t come easy, tough weather conditions made the final round a grind for the field but Papadatos held strong to win the title.

“I stayed patient all day and it turned out pretty good,” said Papadatos.

“It was a massive grind. I knew it was going to be a long tough day but I played pretty solid golf and didn’t take too many risks. I was right up there so I didn’t need to chance my arm too much.”

Finishing the group ahead of his nearest rival, Jake McLeod, Papadatos watched to see if the Queenslander could make an eagle on the 18th to force a playoff.

“It was a little bit nerve racking but I wasn’t too worried about it,” added Papadatos.

“I did my job and if Jake made an eagle on the last it would’ve been fantastic to go to a playoff but I wasn’t thinking about it too much.”

This becomes Papadatos’ second win on the ISPS HANDA PGA Tour of Australasia, but first on home soil after he won the 2014 New Zealand Open.

Between his two victories, Papadatos has spent time competing on the European Tour, learning a tough lesson about what it takes to compete at the top echelons of world golf.

“I learned a lot last year and realised I had a lot of work to do,” added Papadatos.

“As hard as it was, as much I hated it over there and had a miserable time, I think it’s paid off to know what to expect when I get over there next time.”

“Obviously I’m playing better than what I was in Europe. I’ve found a bit of form but the guys over there are really good.”

“If I played like I did this week, over there, I’d be right up there, but week in week out I’ve got a bit of work to do.”

Coming home at the end of 2016, Papadatos committed to working hard, forgoing a Christmas break to ensure he was primed for the start of the 2017 season.

The hard work has paid off and he returns to the European Tour next week via the tri-sanctioned ISPS HANDA World Super 6 Perth buoyed by confidence from his Oates Vic Open win.

For his win Papadatos collected AUD$90,000, the winner’s share of the AUD$500,000 up for grabs. This shoots him to the top of the ISPS HANDA PGA Tour of Australasian Order of Merit early in the season.

With McLeod and Bland sharing runner-up honours, veterans David McKenzie and Richard Green finished tied 4th on 13-under the card.