Renato Paratore powered his way to an historic Italian success with his three-shot victory in the Betfred British Masters – the first main European Tour tournament since the golfing world went into lockdown in March.

The 23-year Roman golfing gladiator was in a class all of his own in posting a closing two-under par 69 to card an 18-under par tally on the hilly and demanding Close House course.

Paratore went 62 holes over the hilly and testing course before dropping his first shot and putting an end to a chance of matching a 25-year old record set by Swede Jesper Parnevik in posting four bogey-free rounds to capture the 1995 Scandinavian Masters.

Paratore’s maiden Tour victory came at the 2017 Nordea Masters and he becomes the first Italian to win on the European Tour in two years since Francesco Molinari captured the 2018 Open Championship at Carnoustie. 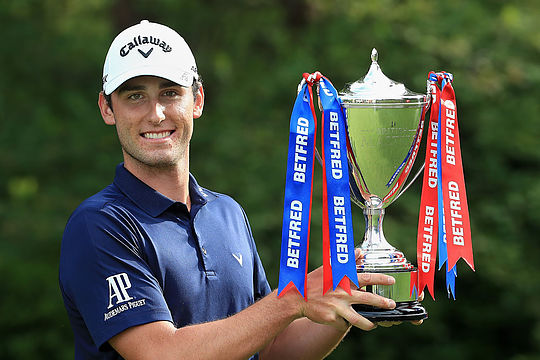 And Paratore is also the 29th Italian to win in the 48-year history of the European Tour when then 24-year old Baldovino Dassu became the first to win on Tour at the 1976 British Masters.

Paratore said: “I am really happy. I played very solid and I didn’t expect to come back and win my second title after the lockdown. I have worked really hard over the last year and I am really happy to win again.”

“I never thought about it today because if I start to think about it, I am going to make a bogey. So, I just told myself to play good and try to win the tournament.”

Dane Rasmus Hojgaard (70) was runner-up on 15-under par and with South African Justin Harding (72) third on 14-under par.

Jason Scrivener was the best of the Australians in equal 29th place with Jake McLeod the only other Aussie to make the weekend in outright 67th place following a disappointing final round 6-over 77.

Maverick Antcliff, Scott Hend and Min Woo Lee all had the weekend off.

The six-tournament UK Swing now heads to the Forest of Arden Marriott Hotel & Country Club for the €1,000,000 Hero Open.