South Korea’s Inbee Park has won the Kia Classic on the LPGA Tour by a convincing five stroke margin from Americans Amy Olson and Lexi Thompson for her 21st career LPGA Tour win.

Park, who led after every round, had finished second on three occasions in the Kia Classic, most recently in a tie for second in 2019. It was Park’s first tournament of the year, after taking a few months off, including time in Korea. 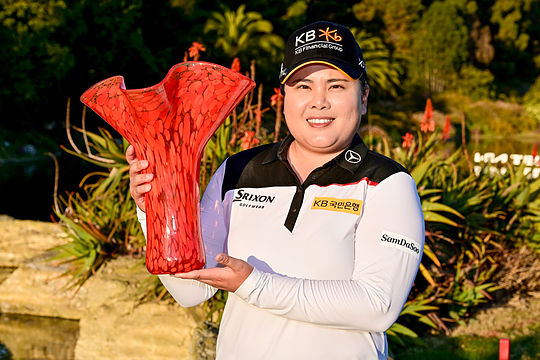 “It was a great week this week,” said Park. “It was my first week back out in three months or so, and I played so good. I mean, I couldn’t believe how I was doing out there this week. I thought this week was just kind of a preparation for next week, but I exceeded so much more. I’m just really happy.”

Her US$270,000 first prize pushed her career earnings to just over US$17 million.

“I have played really, really well on this golf course, but I was never able to win, remarked Park.

“I looked at this trophy in the final round, I thought, I almost had it a couple of times…so finally being able to win it, to have this one in the collection of my trophies, it’s a beautiful trophy,”

The best round of the day came from American Stacy Lewis, who shot 7 under to finish the tournament at 6-under 282 and tied for seventh.

Minjee Lee finished the best of the Australians in a share of 5th position at 7-under-par followed by Sarah Kemp who shared 44rd position at even-par. Hannah Green rounded out the Aussies who made the weekend sharing 61st position at 3-over.

Park’s victory is the LPGA’s Tour’s first international winner of the year, after Americans Jessica and Nelly Korda and Austin Ernst claimed the first three tournaments.

The 32-year-old Park, ranked fourth in the world, now heads to the desert for the ANA Inspiration in Rancho Mirage.