Golf owes Tiger Woods a lot…just for the players and fans he has drawn into the game.

Woods might not be the reason South Korean golf sensation Sung Hyun Park started in the game. 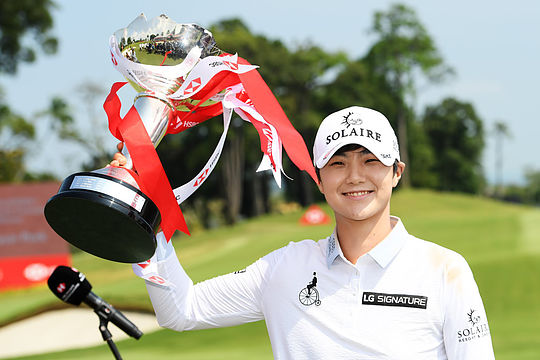 Yet the former world No 1 has certainly helped her with her finish.

Park fired a brilliant final-round eight-under-par to finish 15-under-par and score a two-shot win over Australia’s Minjee Lee at the $1.5m HSBC Women’s World Championship at the Sentosa Golf Club in Singapore.

Park has a variety of nicknames, mostly due to her tenacity and one of them is actually ‘Tiger’ and not just because Woods is her hero.

She had the honour of meeting Woods at a TayorMade brand shoot early last month and admitted that chance meeting had helped inspire her to victory.

“If Tiger is watching this interview, then I would want to say that because we met, you gave me such a good energy, that made me win this tournament,” she grinned.

It was a Tiger-like charge that saw her win after trailing world No 1 Ariya Jutanugarn by four shots going into the final round.

And while Jutanugarn went backwards, finishing tied for eighth with a three-over-par final round, Park finished like a train to overcome her rivals in the hot, steamy conditions, shooting the low round of the week to storm to victory.

“The secret, I would say, is that I just tried to focus shot-by-shot today, and because of the hot weather, I was holding my umbrella really close,” said Park.

“I was holding it really low so I could only look at the ground and the sweat dripping off my face—that narrowed by focus.”

Lee finished second for the second week in a row and was left rueing one shot that probably cost her any chance of victory.

“I thought I hit a good drive on 14, I just over-drew it a little bit and the wind was left-to-right,” said Lee.

“It ended up catching the bunker and went into the tongue in the rough.”

“I thought I hit a pretty good chip shot but probably just a little bit short because if you go over, it’s going to be down the swale.”

“It just came out a little bit short and then I decided to chip it again, which I didn’t really hit a good chip shot.”

“So that hole was pretty much the killer.”