Korea’s Sanghyun Park fired a magnificent 8-under 63 to claim a wire-to-wire victory at the US$1,000,000 Shinhan Donghae Open on Sunday.

Park began the final round with a slim one-shot lead, but he pulled away from the rest of the field after scoring six birdies on his front nine.

Even with a five-shot lead at the turn, Park continued to dictate proceedings as he marked another two birdies on his scorecard before signing for 22-under-par 262 total. 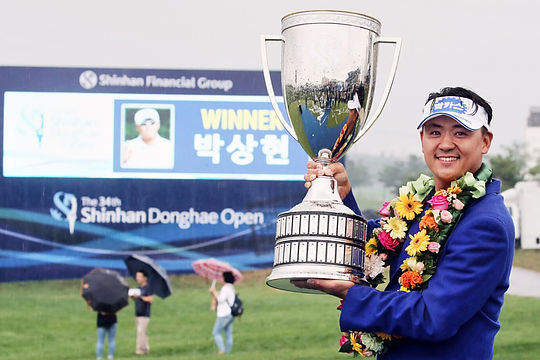 The Korean set a new tournament record for the lowest winning gross score. Jiman Kang and Gaganjeet Bhullar, champions in 2006 and 2016 respectively, jointly held the previous record of 269.

Travis Smyth displayed plenty of promise finishing the best of the Australians as he notched up his first top-10 on the Asian Tour. He finished in equal 7th place following a final-round 70.

“Today was a little bit shaky off the tee. Other days I was finding a lot of fairways so I was just mad at myself. I missed, just a bunch of times. It would have helped my score a lot. But, it wasn’t meant to be as the leaders’ scores are very low anyway,” said Smyth.

“I’m looking to try to keep my card for next year. I’ll be playing in the next few events. It’s certainly one step in the correct direction.”

Zimbabwe’s Scott Vincent posted his eighth top-10 finish on the Asian Tour this season after a carding a 66 to land in lone second place.

He crept up to Park towards the end of the round after sinking three consecutive birdies from holes 13 to 15, but his tournament unravelled after his approach at the 16th found the water, resulting in a double bogey.

Western Australian amateur star Min Woo Lee continued his solid showing in pro tournaments finishing in a share of 37th place with a final round 74 robbing him of a spot inside the top 20.