World number one Inbee Park has won the Women’s British Open at Turnberry with a sparkling final round of 65, coming from three shots behind fellow South Korean Jin-Young Ko.

In 2013, Park came to St Andrews looking to win a calendar year Grand Slam after winning the first three majors of the season. The tilt with history wasn’t to be on that occasion but the 27-year old showed her mettle at the business end of the championship this year. 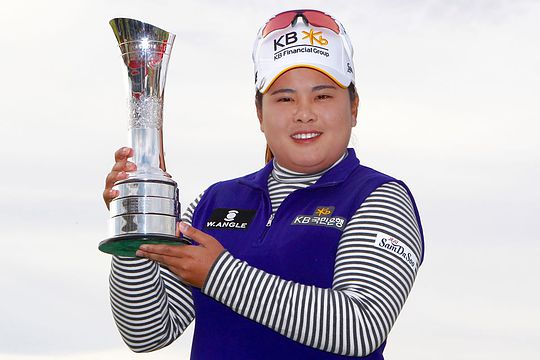 Park picked up seven shots in her last 12 holes for a 7-under 65 and a 12-under total to overtake Ko, whose grip on the title was lost when she found the burn fronting the 16th green.

“I didn’t feel that comfortable coming into this week but to overcome a lot of things and win the championship is phenomenal.”

Park also won the ‘5th major’ – the Evian Championship – in 2012 however that event was not awarded major championship status until 2013.

20-year old Ko was playing her first event outside of Asia and finished runner-up on 9-under after a final round 71.

With a local caddie on the bag, Ko’s was a remarkable performance considering links golf and the bitterly cold, windy conditions that prevailed for most of the week would have been completely foreign to her.

Ko began the final round tied for the lead with Teresa Lu, and made an eagle and two birdies around the turn to go three shots clear after 10 holes.

Meanwhile, Park separated herself from a chasing pack that included No. 2-ranked Lydia Ko and Suzann Pettersen but still had Ko ahead of her.

Park then eagled the 14th hole from 20 feet to close to within a shot as Ko missed a par putt on No. 13 shortly after. When Park holed a 4-footer for birdie at the 16th, she took the lead for the first time and held on as Ko faltered at the same hole soon after.

Lydia Ko’s bid to become the youngest major winner came up just short with a final round 69 giving her a share of third place at 8-under with Korean So Yeon Ryu.

WA’s Minjee Lee mixed five birdies on the final day with four bogeys and a double bogey to finish with a final round 73 for a four-under total, good enough for a tie for 9th.