South Korea’s Park Hyun-kyung has won her maiden KLPGA title in circumstances she is certain to remember for the rest of her life.

The 22-year-old took part in the AUD$3.8 million Korean Ladies Professional (KLPGA) Golf Championship, which was the first major pro golf tournament to return to the fairways since the COVID-19 pandemic swept the world a couple of months ago. 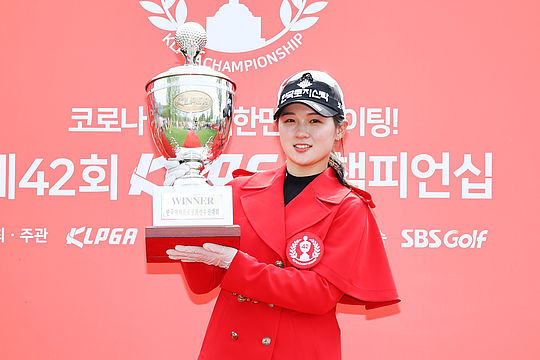 With the LPGA Tour on hiatus, the Koreans that usually dominate the field on the other side of the Atlantic instead teed it up in their own country in a bid to keep match-fit while the US tour awaits a return some time in late July.

Four decades in the making, the KLPGA Championship is an iconic event for the South Koreans. Of the trio of players in the world’s top-10 that decided to play this week, both World No. 3 Sung Hyun Park and No. 6 Sei Young Kim failed to light up the course, missing the cut and finishing T46 respectively with World No. 10 Jeongeun Lee6 the only success story sharing 15th place at 9-under.

Park’s back-to-back weekend rounds of 67 were good enough for a one-shot win over Bae Seon-woo, who won the title in 2016, and Lim Hee-jeong, who shared second place at 16-under.

Park took home close to AUD$280,000 for her efforts, which were made all the more special with her father performing caddie duties all week.

“The moment I had always dreamed of finally has come true,” said a tearful Park following her victory.

“I was so disappointed not to have been part of that winner’s group last year and I am so happy that I got the first win out of the way in the first tournament of the year. I don’t think the next win will come easily for me. I have to keep trying.”

There is no KLPGA tournament for two weeks, although with the weekend cancellation of Korea’s Men’s Open there are obvious fears concerning the schedule. Meanwhile, in America, the LPGA Tour has put back its restart date by a week to July 23.