Patience pays off for Papadatos at WA PGA 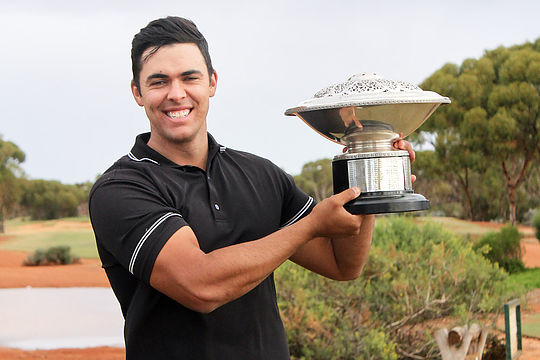 It was a tough day for everyone in the field with wind gusts of up to 42km/h but Papadatos managed to keep his composure as the red dirt swirled.

“It was way tougher in that wind. You have to account for so many more things on every shot. On every putt I was allowing for more break and I was trying to work out where the wind was coming from because it was swirling.”

“It was pretty difficult and very draining playing in those conditions,” said Papadatos, who saw his lead diminish to just one shot after he doubled the 15th hole.

“I thought I was still leading by a shot, I was still in a good position to win the tournament so there was no reason to throw the toys out of the cot.”

“I had to stay patient and finish it off well which thankfully I did.”

“The course is the reason I came here, it was a bit of hike to get here, but the boys were all saying what a great course it is.”

“I was going to go straight to the UK and miss this week but I spoke to my coach, Richard Woodhouse and he said it was worth playing another event before I go.”

“It worked out well. It was a good idea, and Richard is right again.”

Celebrating his victory by road tripping back to Perth, the 25-year-old is heading back to Europe next week a more experienced player.

“Even though last year I had a terrible time, I am going to go over there more ready for what is to come,” added Papadatos who will tee it up in US Open qualifying at Walton Heath.

“I am definitely a better player than what I was when I went to Europe last year. I learnt a lot from that and I have done a lot of work.

“It’s a matter of getting the opportunities, I am playing well enough.”

While Rory Bourke finished runner-up to Papadatos on 11-under the card, he was two shots clear of Victorian PGA Champion Damien Jordan and Matthew Millar.

Rounding out the top-5 on 8-under the card are Darren Beck and Jack Munro.