Starting the day with an eight shot lead, Pearce looked to have picked up where he left off with a birdie on the first hole.

However his round came unstuck with four consecutive bogeys on holes five, six, seven and eight, leaving the door ajar for the chasing field.

An eagle on the 10th returned Pearce to the top of the leaderboard giving him the confidence to regain his composure on the back-9.

A bogey on the 18th saw him finish 19-under par and tied with a fast finishing Matthew Millar, forcing just the second playoff of Pearce’s career.

“I had a playoff in a pro-am back home which I lost, so 50 percent now in my career is not too bad!” Pearce laughed.

“He (Millar) is a great golfer and he’s been playing some fantastic golf the last couple of years especially around Australia so to be up against him was always going to be tough, I knew he’d come out firing. It’s nice to beat a player of that quality.”

It took Pearce three extra holes to emerge victorious after he made par and Millar bogeyed the par-4 18th hole at City Golf Club. 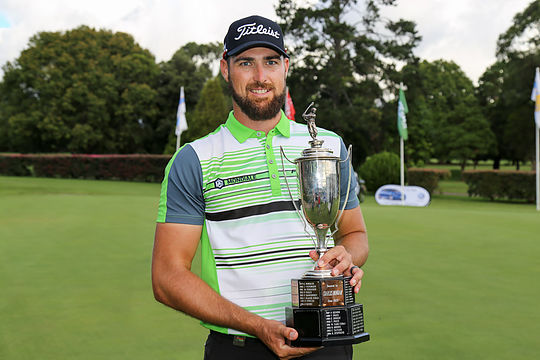 This win gives Pearce exemption on the ISPS HANDA PGA Tour of Australasia for the remainder of this season and 2018, security he said he’s happy to have for the first time in his career.

“I haven’t been exempt going in to a year before so it really helps. Winning is winning, it’s awesome for the confidence,” added Pearce who has attended Qaulifying School the past four years.

“Hopefully I can build on this and have a really good year and jump on to a main Tour somewhere.”

There’ll be a short rest for the New Zealander who has status on the PGA TOUR China which tees off its season at the Henan Open on May 9.

“I’ve got status up in China, so I’ll be playing PGA Tour of China when it starts around May and I’ll also be playing the remainder of this season in Australia.”

Matthew Millar was a gallant runner-up, firing the best round of the day, 6-under 64 with eight birdies, to put the pressure on Pearce and force the playoff.

Three shots back and taking confidence out of a terrific tournament to finish third was recent PGA Trainee graduate Adam Burdett (VIC) on 16-under the card, Mark Brown (NZL) was fourth on 15-under, Jordan Zunic (NSW) rounds out the top-5 on 14-under the card.

For his win Pearce claimed AU$18,750 in prizemoney and is now 20th on the ISPS HANDA PGA Tour of Australasia Order of Merit.