Azer Pehlic and Kirsten Rudgeley, both of Mount Lawley Golf Club are now proud holders of the 2019 WA Amateur titles after an exciting weekend of golf held at Wanneroo Golf Club.

Spectators witnessed a slice of history as Mount Lawley Golf Club produced both winners, a first at the Championships. 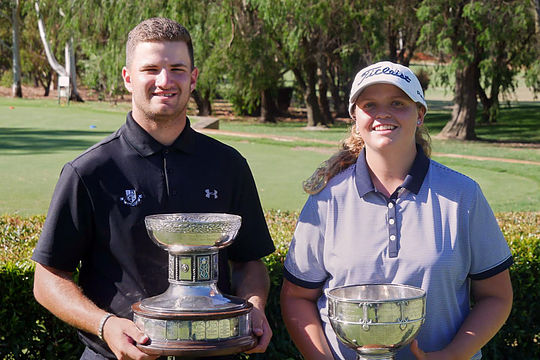 The Men’s final was a tight tussle between Pehlic and Haydn Barron (WAGC) across 36 tough holes of golf.

Pehlic and Barron both held 1up leads at various stages throughout the first 18 holes, but neither was able to break away from the other and the second 18 holes of the day were no different as it came down to the wire.

Both Pehlic and Barron were wayward off the 17th tee and had to scramble to salvage bogeys and halve the hole, setting up an enthralling battle heading down the 18th.

Barron chose to hit iron off the 18th tee and this paid off when he found the perfect spot on the fairway. Pehlic went down a more aggressive route with driver and found himself in trouble when he overshot the fairway.

Despite his good tee shot, Barron came up short left with his approach and found the greenside bunker. Meanwhile, Pehlic bunted out a low running iron that trickled to the right edge of the green.

Barron couldn’t get up and down from the bunker and Pehlic ended Barron’s hopes with a clinical putt on the 18th hole to give him the win in front of elated family and friends.

In the Women’s final it was a game of cat and mouse between competitors Kathryn Norris and Kirsten Rudgeley.

Rudgeley birdied the second hole to take a 1up lead early on and moved further ahead when Norris bogeyed the par 5 6th.

A string of birdies on the back 9 swung the momentum further in Rudgeley’s favour and she looked to be running away with the Women’s title at 5up.

However, Norris wasn’t done yet. A good putt on 18 kickstarted a run of five consecutive birdies and suddenly Rudgeley’s lead had been cut to only 2.

Norris soon stumbled with three back to back bogeys and a birdie from Rudgeley on the 27th hole shot her lead back out to a commanding 6up with Rudgeley eventually taking the victory 5&4.