Cameron Percy’s tied 11th finish at the Albertsons Boise Open on the Korn Ferry Tour on Sunday secured his return to the PGA Tour for the 2019-20 season on the back of a seventh top-25 finish of the season.

Percy, 45, fired a two-under-par 69 final round to finish at 13-under-par, six shots behind winner American Matthew NeSmith. Percy will join Rhein Gibson as the two Aussies guaranteed to progress from the Korn Ferry Finals to the PGA Tour. 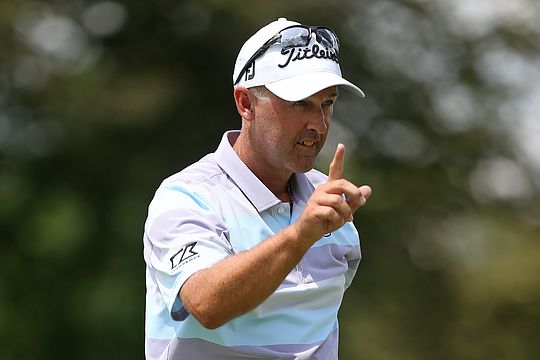 NeSmith secured his first Korn Ferry Tour title in Boise, shooting a final-round, 7-under 64 to finish one shot clear of Viktor Hovland and Brandon Hagy.

With the victory NeSmith secures his first PGA Tour card and takes the top ranking of The Finals 25. He stands 319 Points clear of Hagy (who has gone T5-T2 to begin the Finals), and will have a chance to secure fully exempt 2019-20 TOUR status with a top-5 result this week.

With a tie for second on Sunday, rookie Hovland added to his T11 at last week’s Nationwide Children’s Hospital Championship to accumulate 620 Korn Ferry Tour Finals Points and be comfortably inside the 200-Point threshold needed to secure a spot in The Finals 25 and a card on the PGA Tour.

With Rhein Gibson having already qualified through the year, four other Aussies still have chances to be promoted to the main tour as the Tour Championship heads to the Victoria National Golf Club in Indiana this week.

With 12 spots in the final series 25 already accounted for, up to 13 PGA Tour cards will be available this week.

Curtis Luck missed the cut by a stroke that would have secured his PGA Tour card following a T7 finish at last week’s Nationwide Children’s Hospital Championship, but still is ranked 15th and well placed to make a move with a solid result this week.

Cameron Davis shared 25th place result in his second Korn Ferry Tour start of the season, following a T56 at the Nationwide Children’s Hospital Championship. Davis is currently in a share of 34th overall in the standings and in likely need of a top-20 finish this week.