Perez back in winner’s circle at OHL Classic

Pat Perez won the OHL Classic at Mayakoba on Sunday in Mexico firing a 4-under-par 67 for a two-stroke victory over third-round leader Gary Woodland on the Greg Norman-designed El Camaleon course. Perez finished at 21-under.

It was Perez’s second PGA Tour win and first since 2009 with the victory built on a solid 9-under-par 62 on Saturday. A true tour journeyman, Perez has been a professional for over 18 years and has amassed more than US$20 million in prize money despite just two wins. 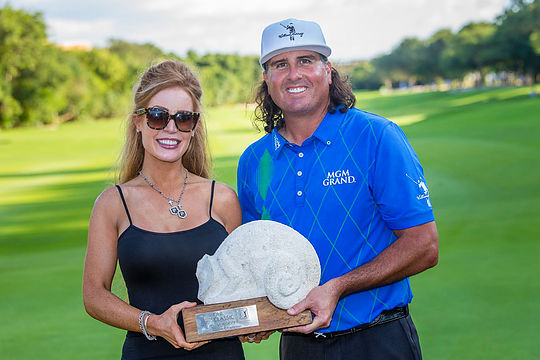 “I just saw the line, I thought I could make them all and I just had a confidence,” said Perez.

“I had an entirely different attitude than I would have had a few years ago. It was definitely a different win than last time.”

“Last time, I was a little more scared coming down the stretch. I didn’t really believe and this and that. This time, I really had like this calmness, kind of like a madness to get it done.”

Woodland was the third-round leader but he stalled out on Sunday with four birdies and three bogeys, finishing with a 1-under 70. It was not nearly enough to overtake Perez, who made 23 birdies and an eagle on the week.

Perez had recently taken time off golf for surgery on his shoulder in February. The break must have done wonders as he returned with a tie for 33rd in Malaysia, and tied for seventh last week in Las Vegas.

“The layoff was great,” he said. “I think I needed it mentally and physically after 18 years of playing professionally. It was just kind of a nice break. I’m so stubborn I needed a forced break.”

Rookie professional and former Australian Amateur champion, Cameron Davis, was the best of the Aussies finishing in a very creditable tie for 15th to pocket AU$130,000 and will return to this week’s Australian Open full of confidence.

It was just Davis’ second professional start and he headed into the final round at 11-under and in a tie for 14th before carding four birdies and three bogeys.

Marc Leishman was also at 11-under and in a tie for 24th, with Cameron Smith at 8-under to have a share of 42nd position. Steven Bowditch missed the cut with rounds of 81-72.

The PGA Tour has just one event left on the fall calendar. Next week’s RSM Classic in Sea Island, Georgia, will be hosted by Ryder Cup hero Davis Love III before Tiger Woods’ event in the Bahamas in December.

The opening 2017 Tournament of Champions in Hawaii is not far off. It’s an event Perez will now get to play in as he gets an automatic invitation because of his win this week at Mayakoba.