The 41-year-old only American finished the co-sanctioned event by the PGA and Asian Tours at 24-under to take home the $US1.26 million ($A1.59 million) prize purse and 500 FedEx Cup points. It was Perez’s third PGA Tour win of his career and his second in his last 25 starts.

Victory also earned him an automatic entry for next year’s Masters in April.

One year ago, Perez was coming off shoulder surgery and playing on a major medical extension. He received a sponsor’s exemption into the CIMB Classic and finished T33. More importantly, he regained some confidence after the long layoff. Three weeks later, he won at Mayakoba to regain his playing status.

His story is classic journeyman material. Last season he won the OHL Classic at Mayakoba and has enjoyed a good year on the PGA Tour. With four top-10 finishes, he made it to the Tour Championship and has amassed over US$5 million in career earnings. 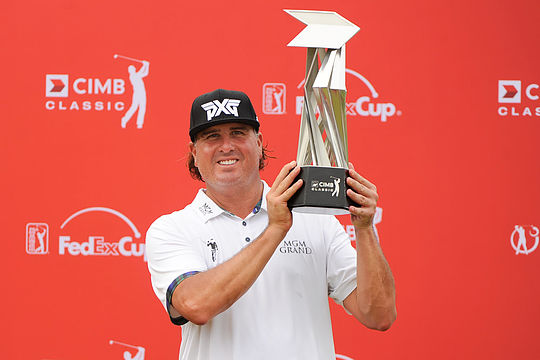 “I really can’t believe what’s gone on basically really a year from this tournament last year,” said Perez on Sunday. “But if they hadn’t given me the spot (at CIMB), the funny thing is I don’t know if I would have started the Tour until January. So all those chain of events might not have happened.”

Perez has proven that age is no barrier in golf, and this week in Malaysia he once again showed that his unique approach towards the game can also bring rewards.

“I’m not going to change anything. I’m still not going to work out. I’ll still have a bad diet, and I’m going to enjoy myself,” Perez said. “I’m just taking it one day at a time, I really am. That’s all I’m doing. I don’t get ahead of myself, I don’t look in the past, I’m just kind of doing it.”

Xander Schauffele, who won the Tour Championship just a few weeks ago at East Lake, faded with four bogeys to drop from overnight second to tied-third alongside South Korea’s Kang Sung-hoon at 17-under.

Cameron Smith was the best of the Australians after starting the final round in a tie for 15th, the former Australian Amateur champion fired the lowest score on Sunday with an 8-under-par 64 to finish in a tie for 5th at 16 under, eight shots behind Perez.

Smith also carded a 64 to hold the lead after the opening round but a one-over par 73 on Saturday damaged his chances to claim his second PGA Tour title after winning the 2017 Zurich Classic of New Orleans.

In his 64 starts on the PGA Tour Smith has one victory, seven top-10′s and has made the cut in 38 events to bank a tidy US$3.8 million in career earnings.

Rod Pampling fired disappointing final rounds of 77-73, dropping over 40 places to finish in a tie for 69th position to finish the next best Aussie behind Smith at 1-over, a shot ahead of Scott Hend.