Nobody hands up titles like the Victorian men’s and women’s Amateur Championships without a heck of a fight.

And with an honour board that reads like a who’s who of golf in this country, victories were even sweeter for Royal Melbourne’s Alizza Hetherington and The Vintage (NSW) golfer Dylan Perry at the Woodlands Golf Club this month. 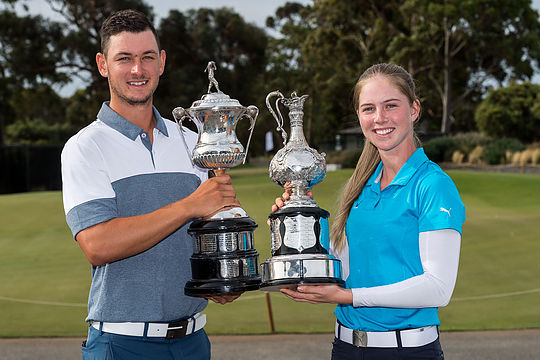 Mind you, it took more than 36 holes for the pair to triumph – both finals went to sudden-death before this talented pair were able to prevail.

Still only 16, Hetherington made a monumental move to improve her golf when she came from the Northern Territory to settle in Victoria.

Yet she showed maturity beyond her years when she defeated another teenager, Queensland’s Rebecca Kay at the 37th hole after the pair exchanged the lead several times in a see-sawing match.

At one stage Hetherington got herself six-holes up but Kay fought back courageously and actually had the lead after 28 holes.

When they finished 36 holes all square the first sudden-death hole was a ripper.

Both players found the fairway from the tee before Kay put her approach around seven metres from the hole.

Hetherington then played the key shot with her 52-degree wedge, getting the approach inside Kay’s to two metres from the hole.

After Kay’s birdie putt slid by, Hetherington stepped up and calmly holed for birdie and the Championship.

Hetherington now holds the rare achievement of being both the Victorian Women’s Amateur Champion as well as the Victorian Junior Girls Champion, sharing this honour with some of the greats of Victorian women’s golf including Jane Lock, Louise Briers and tied youngest at 16 with Misun Cho.

Perry went to lunch with a two-hole lead which soon evaporated in the afternoon as the players traded blow for blow.

All square after 36, the next four holes of sudden-death were all halved with pars until Lyras missed the green and subsequently made a bogey at the 168m fifth while Perry made par to win the title.