Both players finished their morning matches against their respective opponents Queensland’s Jed Morgan and Doey Choi (Concord GC) with four up leads and those assembled had no idea the afternoon was going to become such an enthralling affair. 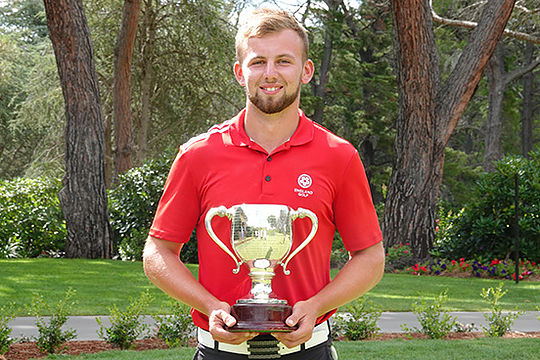 Petrozzi quickly had his opponent Morgan well behind the eight ball, turning his four hole lead into a six up lead after just seven holes, while Yoon had Choi down by seven after only six holes early in the afternoon.

Then the fireworks began.

Morgan won the eighth, then made a great birdie on the ninth to breathe a bit of life back into his match.

All of a sudden, Petrozzi’s putter went cold, and after a couple of three putts on 12 and 13th, the match was back to two-down. Morgan knocked it on to the 15th in two and made a birdie to grab another hole.

Both made pars on the 16th, then with the match delicately poised, Petrozzi failed to get up and down from the back of the 17th and the match was all square heading to the last.

After knocking it into the trees from the tee on the last, all Petrozzi could do was lay up, while Morgan, after a good drive, rifled a long iron onto the back fringe. Petrozzi hit his wedge just over the back also but inside Morgan, and suddenly Morgan had two putts to win the title.

Sadly after riding his first putt about 8 feet past, the young Queenslander couldn’t make the return, and the match was off to the 37th hole.

Both players got good drives away on the playoff hole, before Morgan, who was first away, flew a long iron into the green side trap while Petrozzi slotted his approach onto the front edge but some 55ft short of the hole.

Petrozzi left his best for last, however, and despite being on the green, courtesy of being further from the hole got to putt first. With a sniff of a chance, the 20-year-old Englishman took it with both hands and calmly slotted the monster for an unlikely eagle.

All that was left for Morgan to do was to look and smile, and give his trap shot his all. Sadly for the 18-year-old, his splash shot just slipped by, with it Petrozzi had claimed the NSW Amateur title.

The NSW Amateur has been a happy hunting ground for the English visitors in recent times, Paul Howard won the title in 2015, and last year, Scott Gregory, who was the reigning British Amateur Champion, lifted the title.

A jubilant Petrozzi was thrilled with the win and elated to see his name join those of his countrymen.

“Being honest I didn’t think it would go that far. I felt comfortable there up until the back nine,” said Petrozzi.

The significance of the win and the names Petrozzi will be listed alongside isn’t lost on the Englishman.

“It hasn’t sunk in yet, the way it happened will take a few hours to settle in, but I’m feeling pretty good at the moment,” he said.

While the drama of the men’s unfolded, in the women’s final, Choi, after looking all but gone, suddenly won the eight and ninth holes to get back to five down. All of a sudden she wasn’t finished either.

Choi and Yoon found both found the front trap on 12, and first, away Yoon hit an uncharacteristic blade through the green, while Choi calmly flipped hers out to about 6 feet. All of a sudden it was back to a single hole.

The pair matched scores the next three holes before coming to the 17th. Choi missed the green on the short side, right, and could get up and down, while Yoon made a calm par, and the match was over, with Yoon the Women’s Champion, 2&1.

Yoon was pleased with her win and during her speech thanked the both Royal Canberra Golf Club and Gungahlin Lakes Country Club for providing their course for the week.