32-year-old Norwegian Suzann Pettersen became the first-ever winner of the LPGA’s fifth major, The Evian Championship, as she captured her second career major title and her 13th career LPGA victory in Evian-Les-Baines, France on Sunday.

Pettersen shot a final-round, three-under 68 on Sunday at the newly redesigned Evian Resort Golf Club to finish at ten-under-par and complete a two-shot victory over 16-year-old Kiwi amateur Lydia Ko. 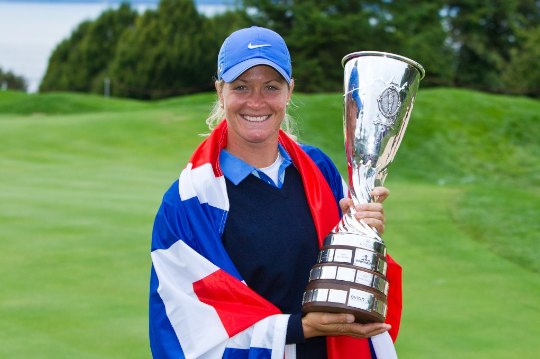 “This is a dream come true,” Pettersen said. “This was by far on my bucket list to win the Evian Championship now that it’s become a major. This is my 12th or 13th time I’m here. This was good timing to win this tournament.”

Pettersen’s only other major championship win came at the 2007 LPGA Championship, although she has been a runner up on four other occasions.

“I don’t know if it’s actually sunk in that I’ve actually won another major,” Pettersen said. “All you’re trying to do is go out there and win tournaments.”

“Today I thought we were going to fight the weather more than we did. It was almost like a walk in the park just staying dry.”

With rain curtailing the event to 54 holes and with more predicted for Sunday, tournament officials put tarps on all of the greens after play on Saturday which helped shorten a delay to the final round to just 90 minutes.

Pettersen got off to a hot start with back-to-back birdies on No. 2 and 3 to take a one-shot lead over Ko.

A bogey by Pettersen on the 7th dropped her into a tie with Ko but she immediately bounced back with a birdie on 8 and never relinquished the lead again.

Pettersen had a two shot lead heading into the difficult par four 18th hole and after Ko hit a 3-wood out of the rough to just over the green behind the flag, Pettersen hit a hybrid to the middle of the green and completed the two-putt for the victory, which was her fourth internationally this year.

Ko was attempting to become the youngest major winner in LPGA history after her successful defence of the Canadian Women’s Open last month.

She stuck doggedly to Pettersen all day but was not able to bridge the gap.

“I was pretty happy with my round (70) today,” Ko said. “Like yesterday, I gave myself a lot of the chances to make birdies, so I hit it much closer to the pins.”

“I probably did half of that today. It was really good to know that I could come so close to the winner at a major.”

It was also the second event running that the amateur has forfeited a near $300,000 payday to her nearest challenger, with third placed Lexi Thompson the beneficiary of a $297,994 cheque at Evian.

For Pettersen, the victory marks consecutive wins on the LPGA Tour following her win at the Safeway Classic two weeks ago.

She has now won three times on the LPGA Tour this season as well as the Solheim Cup with her European team mates.

“It’s been such a great month, five weeks for me, starting off with the Solheim,” Pettersen said. “It was kind of a great kick start for what became probably the month of my career, I would probably say so.”

Karrie Webb and Katherine-Hull Kirk finished at one-under, tied for 15th, while Lindsey Wright blew out with a final round 80 to finish in a tied for 52nd.