The PGA of America has apologised to Phil Mickelson and Brooks Koepka following chaotic scenes at the 18th and final hole of the PGA Championship at Kiawah Island.

As soon as both players completed their second shots into the green, fans swamped the fairway, forcing police and security to escort Mickelson through the crowd. 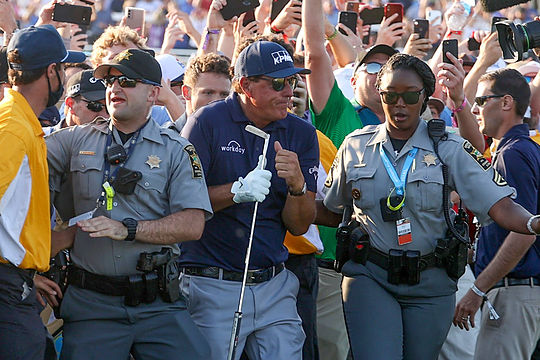 Mickelson emerges from the crowd on the last hole of the 2021 PGA Championship (Credit: PGA Tour)

PGA of America CEO Seth Waugh has since apologised to both players.

“While we welcome enthusiastic fan engagement, we regret that a moment of high elation and pent-up emotion by spectators…briefly overwhelmed security and made two players and their caddies feel vulnerable,” said Waugh.

“We always put player safety at the top of our list and are grateful order was restored. I have spoken to both players and apologised on behalf of the Association.”

While Mickelson said the huge crowds were “…a little bit unnerving but it was exceptionally awesome, too”, runner-up Brooks Koepka, who was returning from injury, was less-than-enthusiastic about the situation.

“It would have been cool if I didn’t have a knee injury and got dinged a few times in the knee in that crowd because no one really gave a s**t, personally,” said Koepka.

“I was trying to protect my knee. I don’t think anybody really understands until you actually you’re coming out of surgery how — I mean, even when I was doing rehab and there’s five people kind of standing by your knee, you get a little skittish.”

Koepka even went so far as to suggest some fans were trying to target his knee on purpose.

“I don’t mind waiting or being in that crowd but getting my — I don’t know, it felt like somebody tried to, I don’t know what the deal was, but it is, what it is. Be putting it in ice today. It feels like s— right now.”

Let’s hope the USGA take note and similar scenes don’t eventuate at next month’s US Open.