Commissioner Jay Monahan has released what he hopes will be the final changes to this year’s PGA Tour schedule, which is now set to restart on June 11.

The announcement comes as the US deals with the world’s largest outbreak of the coronavirus and every week seems to bring new issues that threaten to derail the return of any sport, let alone golf. 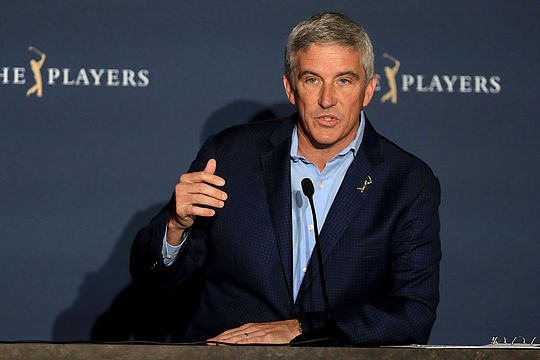 “The health and safety of all associated with the PGA TOUR and our global community continues to be our No. 1 priority, and our hope is to play a role – responsibly – in the world’s return to enjoying the things we love,” said PGA TOUR Commissioner Jay Monahan.

“Today’s announcement is another positive step for our fans and players as we look toward the future, but as we’ve stressed on several occasions, we will resume competition only when – working closely with our tournaments, partners and communities – it is considered safe to do so under the guidance of the leading public health authorities.”

The Charles Schwab Challenge will be the first cab off the rank on June 11 followed by the RBC Heritage a week later on June 18, Travelers Championship (June 25) and the Rocket Mortgage Classic in early July, which was the slot held previously by the US Open. All four tournaments will be played without fans.

“Like all of you, I was saddened to see tournaments and major championships postponed, and The Open Championship cancelled for 2020,” said tournament host Jack Nicklaus. “But we appreciate the PGA Tour giving the Memorial Tournament the opportunity to fill that void in the schedule with these July dates.”

The FedExCup Series, which now consists of just 36 events, will come to an end on September 4-7th at its traditional home at East Lake Golf Club in Atlanta, Georgia.

The three majors that are set to be played this year have not moved from their previously announced dates including the PGA Championship (Aug 6-9), US Open (Sep 17-20) and The Masters (12-15 Nov).

The 2020-21 PGA Tour season will start up again just a week after the close of FedExCup Playoffs at the Safeway Open from September 10 in Napa, California.

“We’d like to express our appreciation to the leadership of the Safeway Open, Houston Open and Mayakoba Golf Classic – which will conclude our calendar year schedule in Riviera Maya, Mexico – for their flexibility, which allowed for the US Open and Masters Tournament to be played in the fall. The accommodations will help the global golf community maximise the 2020 calendar, which will be incredibly impactful for our fans and put us in a strong position heading into 2021.”

Hopefully we don’t see any further changes but the Tour is well aware of the fluid nature of this crisis so both they, and the sponsors, will need to remain flexible if we are to have any hope of seeing out the season.