It wasn’t unexpected but the PGA Tour drawing a line in the sand ahead of LIV Golf’s opening event next month has certainly raised the stakes in what may turn out to be just the start of a protracted legal battle with the world’s biggest golf tour.

This week players were informed of their denial to play in the opening event of the Greg Norman’s LIV Golf Invitational Series in London, which directly conflicts with the RBC Canadian Open, via a memo from the PGA Tour. 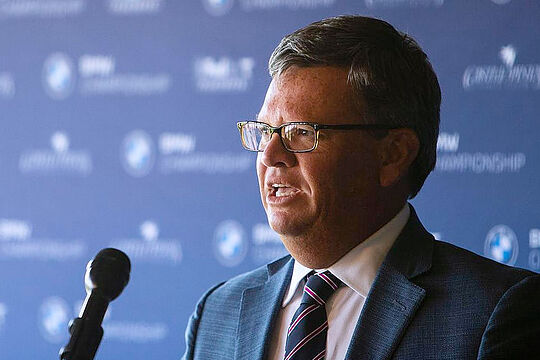 “We have notified those who have applied that their request has been declined in accordance with the PGA Tour Tournament Regulations,” wrote , Executive Vice President & President PGA Tour. “As such, Tour members are not authorised to participate in the Saudi Golf League’s London event under our Regulations.”

“As a membership organisation, we believe this decision is in the best interest of the TOUR and its players.”

According to PGA Tour regulations, players can be granted up to three releases to play in conflicting tournaments. However the Tour also has the sole discretion to deny releases if “such a release would cause [the Tour] to be in violation of a contractual commitment to a tournament sponsor, or would otherwise significantly and unreasonably harm [the Tour] and such sponsors.”

If you’re thinking that passage is wide open to interpretation, you’d be right. It effectively gives the PGA Tour full control over a player’s right to tee it up in any tournament around the world.

The denials are an interesting decision as the PGA Tour, and indeed the DP World Tour, were more than happy to allow its top players including Dustin Johnson, Phil Mickelson and Xander Schauffele to play the Saudi International as recently as this year when Harold Varner III won the title by a shot over Bubba Watson.

Also DP World, who now own the naming rights of the European Tour, are based in the United Arab Emirates; a country with a human rights record as dubious as the Saudi Kingdom or even China, where of course many European and PGA events have taken place over the years.

The news this week out of the LIV Golf camp of a further $2 billion investment into the future of the breakaway league indicates that rather than a flash in the pan as expected by many in the game, Norman and his Saudi pot of gold are here to stay, whether the PGA Tour likes it or not.